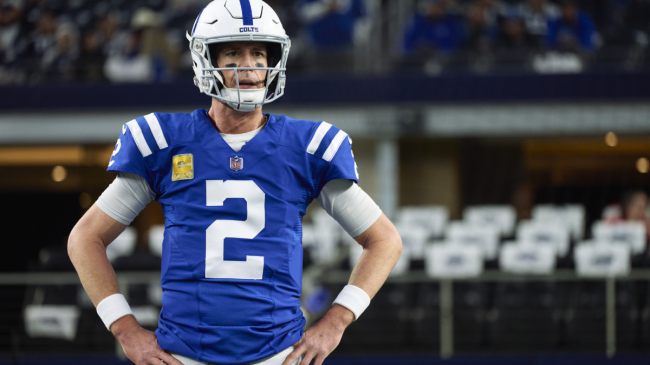 The Indianapolis Colts are making headlines for getting embarrassingly blown out by the Cowboys on Sunday Night Football. The defeat continues a forgettable season for Indy, who’s now just 4-8-1 on the year.

The Colts looked competitive for the first three quarters, with Indianapolis entering the final period down 21-19. They then gave up 33 unanswered points in the fourth quarter to break the game open.

When all was said and done, Dallas left with an impressive 54-19 victory as it continues its pursuit of a Super Bowl title. Dak Prescott threw three scores while the defense forced Indy into five turnovers, one of which was returned for a touchdown.

The Cowboys found the endzone five times over the last 15 minutes of play, leading Indianapolis to pack it in early. Indianapolis actually lined up in “Victory Formation” despite the Colts being down 35 points, as they looked to run out the clock and get back on the bus with their tails between their legs.

The ultimate sign of domination on Dallas’s side. It caused quite the reaction on social media, with fans posting hilarious responses to seeing the losing team kneel out the remaining clock.

You ever seen the LOSING TEAM get in victory formation?! 😂😂😂#DC4L

The loss put a damper on Jeff Saturday’s run as head coach. After landing a win in his first game as Indianapolis’s leader, the Colts have now dropped three consecutive contests. This was easily the most disheartening of the three.

Saturday and Co. will look to bounce back and finish the season on a positive note. Hopefully they’ll be on the winning side next time we see the offense line up in this formation.