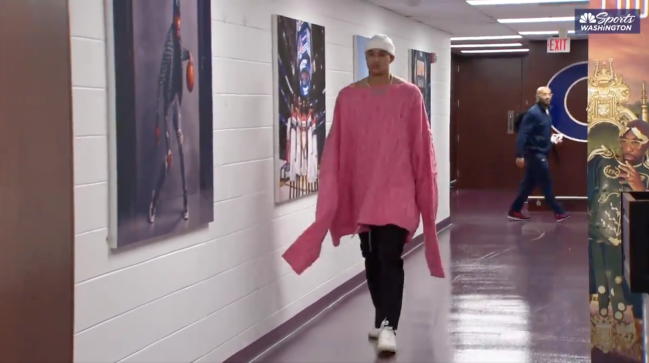 When it comes to fashion, NBA players are usually on the cutting edge. Kyle Kuzma, however, took it too far on Monday night.

As the 26-year-old arrived for the Wizards’ home game against the Hornets, he was shown wearing a massive sweater. Kuzma strolled into Capital One Arena in Washington, D.C. wearing a significantly oversized pink turtleneck.

It was not the move.

When you're off to one of the best starts in franchise history, you get to wear whatever you want😂@kylekuzma | #DCAboveAll pic.twitter.com/2drVu8PpGg

Kuzma is 6-foot-10, so he needs a little extra length in his sleeves and on his torso. And the temperature on Monday night was in the low 40s and was set to dip into the 30s by the time he left the arena.

Neither of those things excuse the atrocity he wore on his way into the locker room, but he sure tried to make his case anyway. After posting the photo on his Instagram profile, the entire internet proceeded to roast him— including some of his friends, former teammates, and other NBAers.

kyle kuzma fighting for his life in his instagram comments pic.twitter.com/Oqbc743SOE

Although there was a (very) small subset of people who were applauding Kuzma for his outfit, the response was overwhelmingly native. The roast extended far beyond the NBA world.

i’m very pro adventurous nba style sense, but this is a sweater made for big bird https://t.co/eg6zSh1g2y

All folks wondering what Kyle Kuzma is wearing tonight have clearly never read The Lorax.

Kyle Kuzma deserves a 15 game suspension for his outfit pic.twitter.com/EHhqBLWtz1

Kyle Kuzma took a break from waving his arms outside at a local car dealership to play hoops tonight.pic.twitter.com/JeVR7HuZVT

Kuzma looking like a piece of chewed bubble gum https://t.co/Hkd0BPPyr6

If the outfit was not bad enough, Kuzma did not play very well. He scored only 11 points on less than 50% shooting (5-of-12) in a six-point loss to Charlotte.

And to make matters worse, he had to walk back into the locker room, look at his phone blowing up for all of the wrong reasons, put his giant sweater back on, and walk out into the freezing temperatures.