Is Matthew Stafford A Hall Of Famer? Richard Sherman Vehemently Says No, Explains Why 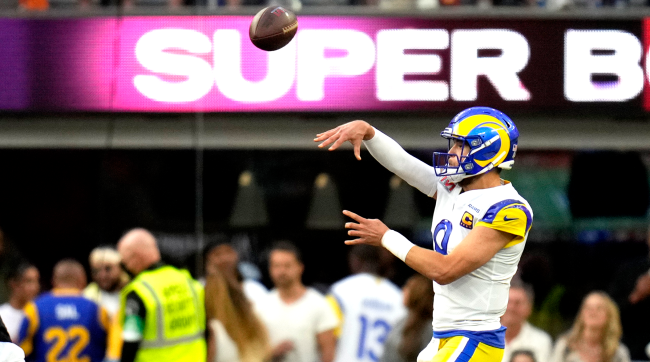 It’s the day after the Super Bowl and quarterback Matthew Stafford has finally got his championship. After toiling away in Detroit with the Lions for 12 seasons, winning just 74 out of 165 games, the 34-year-old finally got to taste success this year.

According to ProFootballReference.com, the most similar quarterbacks (QBs whose career was of similar quality and shape) in NFL history to Matthew Stafford are Tony Romo, Mark Brunell, Steve McNair, Jim Kelly*, Joe Namath*, Jim Everett, Alex Smith, Andy Dalton, Terry Bradshaw*, Joe Theismann. The three with asterisks are in the Hall of Fame.

So is Matthew Stafford a Hall of Famer? Not according to future Hall of Fame defensive back Richard Sherman.

“I’m gonna talk about it on the podcast but the HOF bar is incredibly low now,” Sherman write on Twitter Monday morning. “Like a participation trophy. No all decade team. No All pro. No MVP. 1 Pro bowl. Not even MVP of the SB. Never considered the best in any year he played. At least M. Ryan has an MVP.”

If Matthew Stafford is a Hall of Famer, is Matt Ryan also?

Sherman was then asked, “How many QB’s leave their teams in instantly win?”

His response? “Off the top of my head Tom Brady and Peyton. They also have alot of hardware in their trophy cases.”

Show me the accolades. Megatron was in Detroit. Made pro bowls and all pros.

He gets his day brother. But just throwing around HOF like that just irks me. So many had to be the most dominant to make it.

Sherman went on, “He did nothing spectacular. Its really a macrocosm of his career. Did good. Not great. Made a few wow passes. Made a few face palm passes. Aaron Donald and Von are the two HOF he should thank.”

Lights out?! He was a dropped pick away from his team going home in the NFC Championship. Threw two picks in the superbowl. Lights out?! When?!

So did the Guys on the P squad. So did the other 53 guys. That put them in the HOF discussion?

“There is no measuring stick that makes Stafford a hall of famer other than playing in the most passer happy decade in NFL history,” Sherman continued. “Inflated numbers make ever QB that starts 10+ years a ‘hof.'”

Stafford has literally no accolades

Eli Manning
MVP of both superbowls he won.

All Pro isnt fan voted. Neither is all decade team. Its just the best of the best during that time

Show me the accolades. Megatron was in Detroit. Made pro bowls and all pros.

You could. Has 6 Pro bowls. But you could def