Bills WR Isaiah McKenzie Found Out Why He Wasn’t Dressed Vs. Patriots On Twitter, Reacts Accordingly 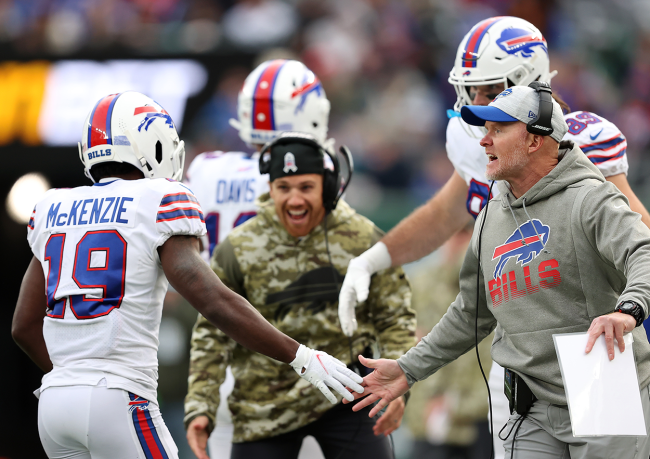 As the Bills faced off with the Patriots on Monday night, the weather was truly insane. With wind gusts up to 50mph, the kicking and special teams aspect of game became much more difficult, and Buffalo wide receiver Isaiah McKenzie found that out the hard way.

Ahead of the game, it was announced that McKenzie, who primarily returns kicks for the Bills, was inactive. He did not dress.

It was not clear why the decision was made, but an inquisitive reporter asked head coach Sean McDermott what went into the move. Answering the question, McDermott said that he didn’t trust McKenzie to be back fielding and returning punts in the crazy weather. His remarks were plain, simple and honest, but ruthless.

Well, apparently that news was not relayed to McKenzie. He found out about his coaches comment after the game, at around 2:15am EST when the video surfaced on Twitter.

In response to the fact that McDermott did not trust him, McKenzie had only one word— “damn.”

It’s hard to imagine any other coach in the league doing something like that. A simple “we did what we thought was best given the circumstances” would have sufficed, but instead, whether intentionally or not, McDermott went for the jugular.