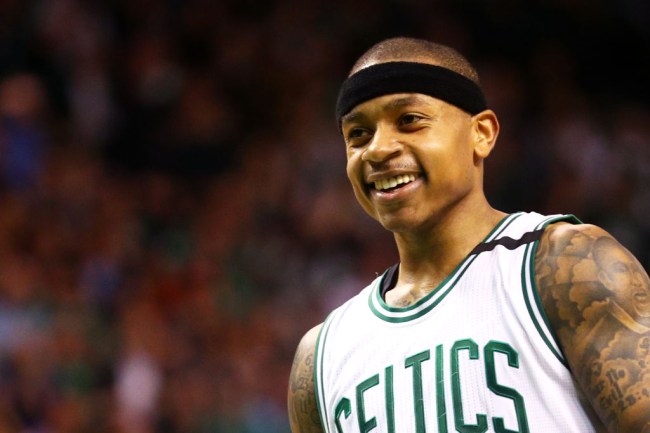 Last year, the Cleveland Cavaliers agreed to what could potentially be one of the most ill-advised moves in their history when they shipped Kyrie Irving to the Boston Celtics in exchange for Isaiah Thomas. Celtics fans weren’t thrilled at the time but based on Kyrie’s performance so far they don’t have much to complain about— especially when you consider the current state of Thomas.

The Cavs almost put the blockbuster deal on hold because of Thomas’ preexisting hip injury but decided to pull the trigger anyway and almost immediately shot themselves in the foot. Despite some impressive performances, the former Celtic only played 15 games for Cleveland before being unceremoniously sent to Los Angeles.

Thomas recently signed a one-year deal with the Nuggets but there was actually a chance he would have played next season (and possibly beyond) in white and green if the team hadn’t dragged its feet. According to ESPN, Thomas reached out to Danny Ainge before inking the contract with Denver to let him know that he’d be willing to return to Boston despite getting royally screwed over last year:

Before finalizing the agreement with Denver, Thomas had reached out to Boston GM Danny Ainge. They talked for 15 to 20 minutes, Thomas says, and he told Ainge: “If the opportunity is there, I would just like to let you know that I’d love to come back.”

Ainge was willing to continue the conversation, but Thomas accepted the Nuggets’ offer before Boston had reached its new deal with Smart.

I applaud Thomas for taking the high road and managing to suppress his inner Milton from Office Space in order to avoid burning TD Garden to the ground.