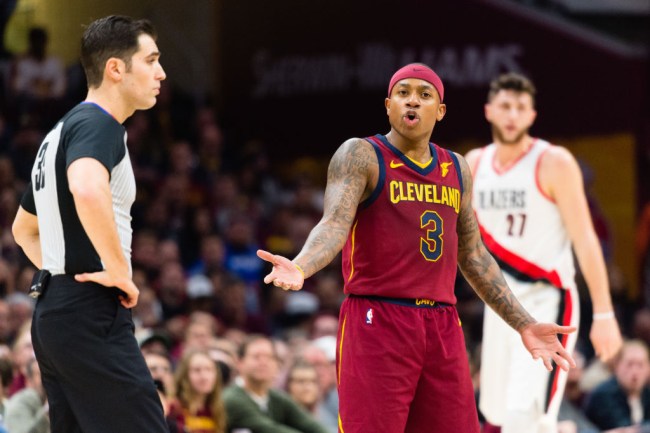 Yesterday it was reported by ESPN’s Adrian Wojnarowski that several Cavs players confronted Kevin Love and accused him of faking an illness to get out of the Cavs game against the Thunder.

With the Feb. 8 trading deadline looming the next three weeks will be fascinating, starting with the dead-man-walking Cavs, who were described by one person close to the team as being in “utter chaos.” ESPN reported that during a team meeting Kevin Love became yet again the convenient scapegoat. A source told The News that Isaiah Thomas led the charge against Love, who turned up ill for Saturday’s embarrassing loss to Oklahoma City and went home after playing just three minutes.

That reportedly didn’t sit well with some of the Cavs, including Thomas who arrived for training camp injured and didn’t play until January. Yet, Thomas has an issue with Love?

Immediately after Isola’s explosive report was released several on the Internet mocked Thomas for going out of his way to snitch on his teammate.

Cavs: so how do address our defense?
IT: *points to Love* pic.twitter.com/eZ88SCkgsZ

"and make sure you put in that everyone questioned Kevin. Also my points per game from last year" pic.twitter.com/dEmVg0V7f9

“Wade ain’t never that loyal on the road.” pic.twitter.com/fxIsygjbp8

“Peep this Bron said Chance was a industry plant..” pic.twitter.com/BBFMBJK7Wn

“JR drinks before AND after the game” pic.twitter.com/JW2qDZv8Od