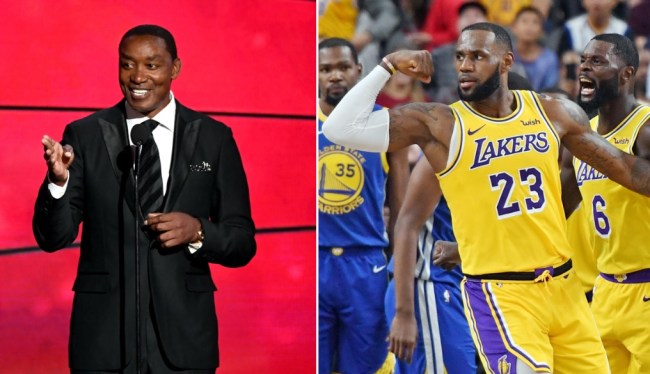 Detroit Pistons legend Isiah Thomas played most of his career against Michael Jordan, but he says there’s a player out there who’s better than MJ.

According to Thomas, LeBron James has already surpassed MJ’s greatness and is the GOAT basketball player.

The best and most “complete” player I have seen in my lifetime is @KingJames on and off the floor. He passed the eye test and the numbers confirm what my eyes have seen in every statistical category. #Goat let it be known! pic.twitter.com/wb2iuLoQ4M

This isn’t the first time Thomas had questioned MJ’s credentials as the GOAT. Earlier this year Thomas stated he didn’t think the current era of players got enough credit, and he felt that LeBron would have probably been more dominant than Jordan if he had played in the 80s and 90s.

“What KD and LeBron are doing, if you put them back in the era of 80s with their talent, athleticism and skill… Who’s the GOAT?”
@IsiahThomas explains to @Chris_Broussard why this generation doesn’t get enough credit pic.twitter.com/orgM5kr2t6

“I think this generation [of players] is not getting enough credit for what they’re doing,”. “Because the athletes that are in this generation are so far superior than what was in my generation. [When we were playing], Jordan was the best athlete that we had ever seen, [but] from an athletic standpoint, there are like 10 or 11 guys in the NBA right now with Jordan’s athleticism. We didn’t have that back then. With what [Kevin Durant] and LeBron are doing, if you put them back in the era of the ’80s, with their talent, their athleticism and their skill, who’s the GOAT?”

Of course, MJ fans blasted Thomas for his take and are calling him salty because Jordan kept him off the Dream Team.

This man beat MJ mutiple times and is still bitter. No dream team for you! https://t.co/X7xnZhMGNM