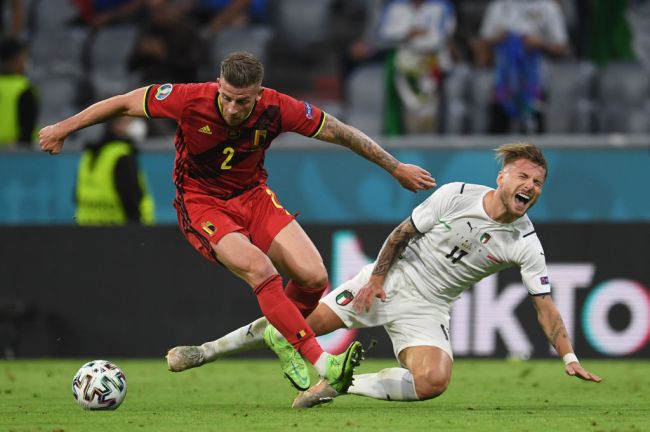 Italian soccer forward Ciro Immobile went down with a very serious injury during his team’s match against Belgium on Friday. However, moments later, he was fully recovered. It’s a miracle!

Soccer players, specifically on the men’s side, are known for their dramatic flops. When it comes to being touched in any situation that might see a foul draw an advantage, they hit the turf and immediately fake an injury. That was the case with Immobile.

The UEFA European Championships have reached the quarterfinal round and Italy faced Belgium in Munich. Both teams were scoreless through the first 30 minutes before the Italian side opened scoring in the 31st.

A high ball was played toward the Belgium box and Immobile attempted to split the defense. However, he came together with an opponent and fell to the ground, immediately grabbing his leg and writhing in agony.

As the defense came to a frustrated pause, Nicolo Barella jumped onto the ball instead of waiting for the ref’s whistle to stop the game. He stepped into the ball and fired a strike past the Belgian keeper to score

Barella’s effort was met with jubilant celebration and Immobile was not missing out. As soon as the ball hit the net, the 31-year-old popped right back up as if nothing happened and joined the party.

The Italian attack was greatly benefited by the confusion in the box as the slight stoppage caused a lapse in the Belgian defense. Either way, we are glad that Immobile is okay. We were really worried.