Ja Morant Had His Rookie Coming Out Party Against The Nets, Shut Down Kyrie At The End Of Regulation 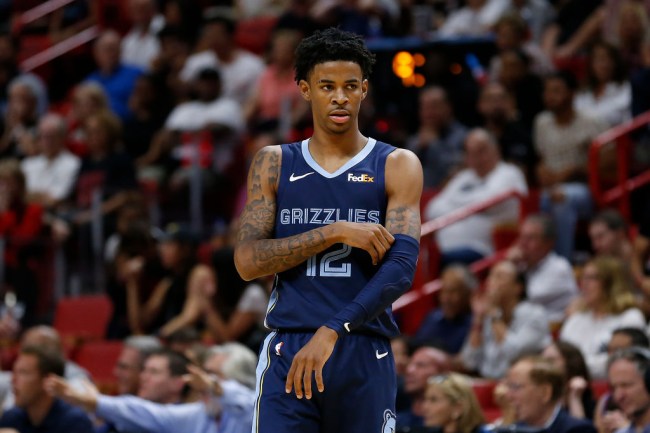 There was plenty of hype, and rightly so, surrounding Ja Morant and the Memphis Grizzlies heading into this season.

The Grizzlies essentially went all-in with Morant as he fell into their laps with the No. 2 pick offering the franchise a chance to go in a different direction and begin somewhat of a new culture in Memphis with the grit-and-grind times essentially ending with Mike Conley being the latest piece of that era traded to the Utah Jazz.

Morant’s rookie campaign got off to a quiet start in the opening two games of the season with a combined 24 points and nine assists, but he had his ‘I’ve arrived’ game on Sunday with the Brooklyn Nets in town.

The 20-year-old was given the green light finishing 13-for-22 from the field finishing the night with 30 points, nine assists and four rebounds. He also turned the ball over six times for the second time in three games, but the positives of the night outweighed the mistakes.

The final couple of possessions of the night are when Morant really shined against Brooklyn. After tying the game up with a tough finish, Morant played lock-down defense against Kyrie Irving blocking his game-winning shot attempt taking the game to overtime. You’ll also notice Irving clearly travels before the shot, but it’s the NBA and traveling doesn’t exist, nevertheless, the block and then then the flex afterward is fantastic.

Hits the game-tying bucket, then blocks Kyrie to send it to OT‼️ pic.twitter.com/wTncKTuHEm

Talk about a big-time moment for Morant in just his third NBA game.

Fast-forward into the overtime with the Grizzlies down two with 3.7 seconds left and Morant came up big again with the assist on Jae Crowder’s buzzer-beating three that gave the Grizz the 134-133 win for their first win of the year.

Don’t look now, but the Grizzlies are fun again. It’ll be tough for them to crack the Top 8 in the West when it’s all said and done this year, but Morant and that roster is going to put on a show night after night which is something the Grizzlies haven’t necessarily had over the past couple of seasons.