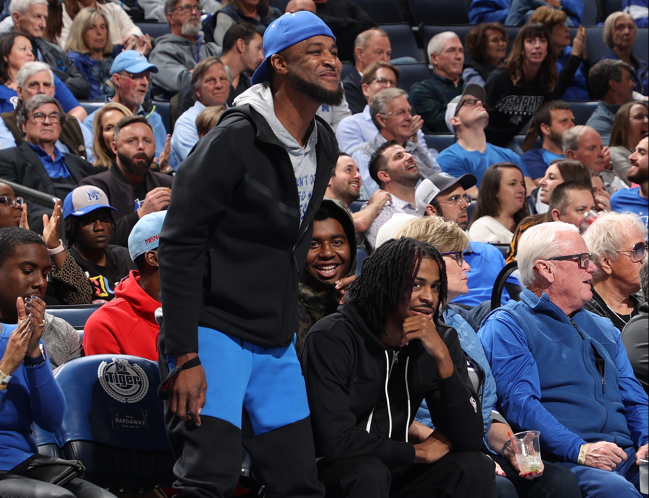 With their 114-106 win over the Timberwolves on Friday night, the Memphis Grizzlies advanced past the first round of the NBA playoffs for the fourth time in franchise history. After the game, Ja Morant’s father, Tee, was involved in not one, but two incredible interviews.

Immediately after the series came to a close, Tee joined ESPN’s Malika Andrews alongside Karl-Anthony Towns’ father, Karl Sr. Both of the NBA dads became friends during the first round playoff series and made a bet with one another.

Whichever son lost the series, his father would have to wear the jersey of the son who won. After the game, Tee tried to make Karl Sr. put on his son’s jersey despite a difference in size.

Things got a little bit awkward, but Towns was a good sport about the whole thing and the two capped off the night with an incredible moment between them.

Ja gave his jersey to KAT Sr. after the win and Tee Morant wanted him to put it on 😂 pic.twitter.com/tLnTXILwTc

However, Tee More was not done with the single interview. In fact, he had only just gotten started.

After the court had cleared out and the arena had emptied, Tee was presumably waiting on his son to get showered up and head home. While he was waiting, he wandered over to Pierre Noujaim of Minneapolis’ Fox 9, who was finishing up his postgame stand-up.

Tee asked if he could join in. Nojaim, of course, obliged. What happened next was hilarious.

Tee proceeded to go off about the series, gave a brutally honest assessment of his son’s play, discussed Karl Sr.’s reluctance to wear the Grizzlies jersey and how there is no rivalry with the Timberwolves because Memphis is going to “kill everyone.”

Just trying to wrap up the night & was not prepared for Tee Morant to ask me to do an interview. Love the honesty when asked about his son's play 😂 @JaMorant #GrindCity pic.twitter.com/TpfIAvoHSa

Tee Morant is a real one and Noujaim was thrilled with the exclusive soundbite.