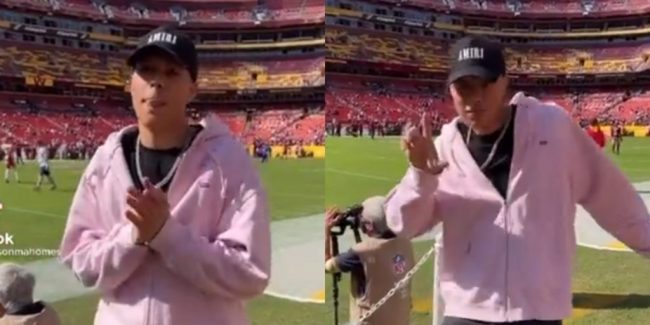 Jackson Mahomes has once again drawn the ire of NFL fans.

On Sunday, the Washington Football Team retired Sean Taylor’s number with a memorial logo on the field 13 years after his death.

Before WFT’s game against the Chiefs, Patrick Mahomes’ brother, Jackson, was seen filming a TikTok over Sean Taylor’s newly painted #12 memorial logo that was chained off from the public.

Jackson Mahomes was seen here dancing on the Sean Taylor “21” logo which was chained off to begin with.

This should infuriate everyone, this is disgraceful. pic.twitter.com/7puweqqOuM

Bigger question probably needs to be why anyone was allowed to stand on it to begin with.

What a goofy. Show some respect to a legend. https://t.co/tSBW9gERJs

I usually ignore this dude’s lameness but this is a really bad look. https://t.co/iWOHVjHYn4

This is wrong so disrespectful, this kid is trash https://t.co/UKkiZQozoE

Aye Slim, you this pressed to go viral!? You could have did ya dance elsewhere on the field but decided to disrespect Sean Taylor instead. Disrespectful asf!! #WashingtonFootball #jacksonmahomes https://t.co/96PzuY0PUI

Update: Jackson Mahomes issued an apology for dancing on the Sean Taylor memorial.

I want to sincerely apologize for accidentally being on the Sean Taylor #21 at FedEx Field. We were directed to stand in that area and I meant absolutely no disrespect to him or his family.