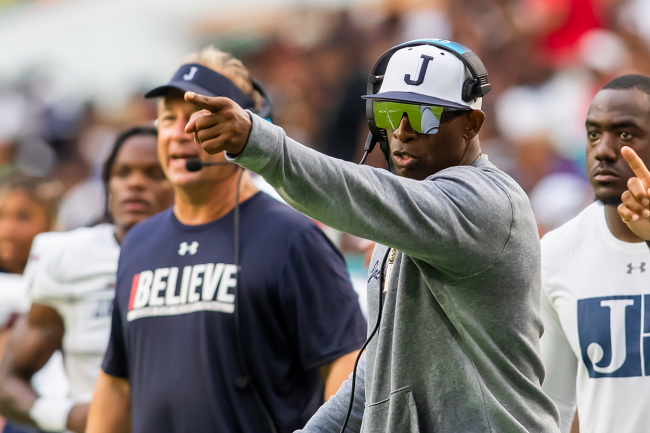 When Deion Sanders took over as the head coach of Jackson State football, he made a promise to treat the program like a Power Five school. Part of his vision included facility upgrades, which he has preached as important since September of 2020.

Well, 18 months after Coach Prime was introduced, the aspirations for which he has spoken into existence are becoming a reality. Jackson State is currently building a brand-new, state-of-the-art facility that includes a locker room, training room, meeting and film room and player’s lounge.

Sanders took his players through a tour of the work-in-progress building earlier this week and shared a video on Instagram. What is being built is going to be pretty remarkable.

The locker room has all the bells and whistles of a P-5 program, the training room is up to date in terms of space and equipment, the film room is as nice as you will see, and the lounge is going to be tricked out to the nines. It will even include multiple barber chairs.

It’s going to be a pretty impressive facility, especially for an HBCU that competes on the FCS level.

The building is the latest upgrade that Sanders has helped oversee at Jackson State. Just a few months after he arrived, the school upgraded its practice facility for football, as well as basketball and track.

The Tigers’ new building will be open for public use to some extent, but certain portions of the facility will be reserved for football operations. This is a huge move for Sanders and Jackson State football as it looks to continue its rise to prominence in the college football world and Coach Prime was at the leading edge.