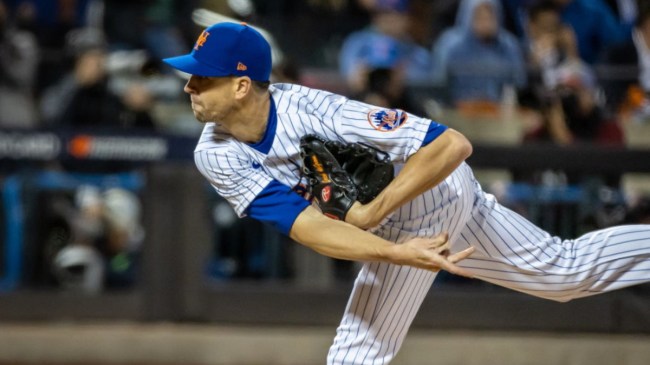 All eyes are on New York early on in the MLB offseason. The Yankees and Mets have two of the games biggest stars entering free agency in Aaron Judge and Jacob deGrom.

Both men are sure to generate plenty of interest in the free agent market and will surely get very lucrative offers from their current teams. So far, the belief has been that Judge will return to the Yankees.

Mets fans will be hoping the same is true for deGrom, but a report has revealed that the star pitcher is keeping his options open.

According to the New York Post’s Jon Heyman, deGrom has told the Texas Rangers that he is interested in the possibility of signing with them.

The star pitcher exercised his option to opt out of his contract with the Mets, which would have paid him $30.5 million in 2023.

When healthy, deGrom has arguably been baseball’s best pitcher. Unfortunately, staying healthy has been an issue. This season, he only pitched in 11 games for the Mets for a total of 64.1 innings. The previous season, he posted a stellar 1.08 ERA, but only pitched in 15 games.

Meanwhile, the Rangers haven’t been good even when healthy in recent seasons. They haven’t finished a season above .500 since 2016. This season, they finished the year 68-94.

The Rangers would be a surprising choice for deGrom, who is 34 years old and doesn’t have much time to wait for a team to become competitive.

While the combined talents of deGrom, Max Scherzer, and a strong batting order weren’t enough to get the Mets past the Wild Card round of the playoffs this season, the Mets still represent one of deGrom’s best options for a deep playoff run over the next few seasons.