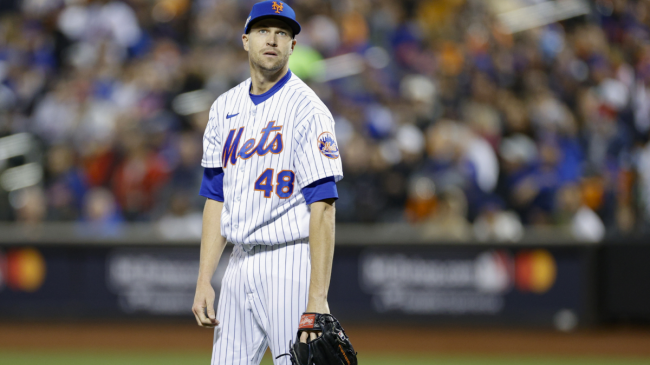 Jacob deGrom made a surprising decision to leave New York and head for the Lone Star State this offseason. The ace will play for the Texas Rangers next season after signing a five-year deal on Saturday.

That deal gave him 185 million reasons to go play in Texas as he’ll now be one of baseball’s most highly paid pitchers. That $185M deal also has MLB fans laughing at his latest comments on the move.

The righty is every bit deserving of that lucrative agreement. He’s a two-time Cy Young winner who’s posted a ridiculous 2.52 career ERA. He should immediately improve a Rangers’ rotation that ranked near the bottom of baseball in production last year. As a result, the team won just 68 games and was eliminated from playoff contention by mid-September.

In his opening press conference, Jacob deGrom mentioned his reasoning for joining the franchise, but nobody truly believes him.

Jacob deGrom on why he joined the Texas Rangers: pic.twitter.com/EnkQiXdgh2

He claims that World Series aspirations are what brought him to Texas (I’m sure it had nothing to do with that massive contract offer). After the Rangers posted their sixth straight losing season, that seems hard to buy.

“Hearing the vision of what the Rangers want to do… Bringing a World Series here. That’s the goal… These guys all have that same vision, and it lined up with what I wanted to do.” -Jacob deGrom

The Rangers haven’t been relevant since the 2016 season, finishing dead last in the AL West three of the last five seasons. Last year’s 68-94 finish was good enough for 4th in the standings.

The franchise has also never won a World Series title, though they did finish runner up in both 2011 and 2012. They’ve made the playoffs just eight times in their 62-year history, having very little success in the majority of those postseason appearances (six first-round exits).

Fans on social media were skeptical, too, posting reactions online.

One fan hilariously wrote, “Yeah, that’s why,” while another commented, “If a World Series was the goal, you should’ve stayed with the Mets. I’d love a candid answer just once.”

The team has attempted to upgrade its roster, signing Marcus Semien and Corey Seager to massive deals last year. The Rangers committed $500M to those two players, alone. Now, they’ll throw even more money at their new stud pitcher.

The vision of a championship is all well and good, but until they make strides on the field, they’ll continue to be an afterthought amongst most baseball fans. Maybe Jacob deGrom can help change that.