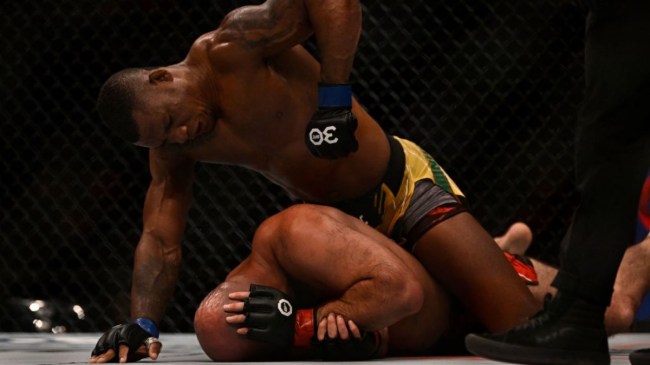 With Francis Ngannou no longer reigning over the division, the UFC has plenty of options for how to move forward with the division.

With Ngannou gone, Ciryl Gane has quickly been put back into a title fight.

His departure also opens up opportunities for fighters like Curtis Blaydes and Stipe Miocic, who he knocked out on his way to the belt.

It could also mean that it’s about time for some new blood to make their way to title contention this year.

At UFC 283, fight fans got to see one of the potential new contenders in action.

Almeida immediately got his wrestling game going and Abdurakhimov had no answer. After working from top position for nearly all of the first 8 minutes, Almeida was able to get the ref to wave off the fight for his 4th consecutive finish to start his UFC career.

13th win in a row for Almeida 😤 #UFC283 pic.twitter.com/wCcwhytvVy

Almeida hadn’t faced the toughest opposition before tonight, but the way that he handled Abdurakhimov was impressive. Abdurakhimov is a battle-tested veteran and this performance was a clear indication that Almeida is ready for a step up.

He has a skillset that you don’t see a ton of at heavyweight. While the division is mostly filled with strikers, Almeida’s ground game is elite.

We’ve already seen the kind of success that this skillset can deliver in the division. Blaydes has worked his way to the top of the division almost entirely based on the strength of his wrestling.

When Blaydes first joined the UFC, his 6th fight was when he truly took a leap into elite competition. Almeida should be tested in his 5th.

The really interesting thing to see when Almeida does get a step up in competition will be what he does when he can’t get the fight to the ground. We have yet to see him have to use his hands very much.

However, there is one big problem. There aren’t many fighters ahead of him that have elite takedown defense.

His next fight should come against a top 10 opponent. There are guys in the top 10 that he would be expected to run through.

From there, he might need a top 5 opponent to be truly tested.

Luckily, he fought so early in the year this year that we should see him at least 2 more times in 2023.

This was his 4th fight in 12 months, so it is possible that we even get 3 more fights out of him before January of 2024.

By the time the year is over, we’re going to at least be talking about Jailton Almeida contending for the belt if he hasn’t already fought for it by December 31st.