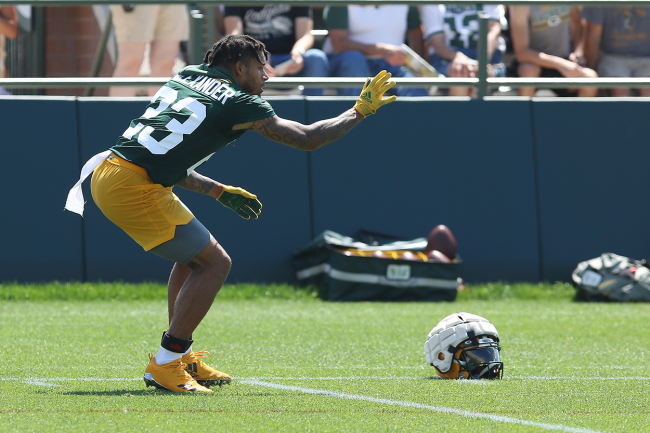 When the Packers take the field this fall, opposing quarterbacks are going to have a hard time throwing the ball. Green Bay’s secondary is loaded and will not leave many receivers open.

Of the talented defensive back group, a lot of pressure lies on Jaire Alexander. The former first round pick out of Louisville missed a good chunk of 2021 due to injury but is back at full health and is in fantastic shape, which he proved on Saturday.

As Green Bay took the field for Day 3 of training camp, Alexander was mic’d up. During the tremendously entertaining snippet that compiled the best moments of his day, the 25-year-old met with fans and got the crowd hype.

He also showed of his remarkable athleticism. As one of the only players on the field, Alexander punted a football up in the air, got on his horse, tracked down the ball that he just booted and successfully fielded his own punt, catching it perfectly in his out-stretched arms.

.@JaireAlexander mic'd up is a vibe.

📺: Back Together Saturday NFL Network pic.twitter.com/hoPgK2kUDl

Let’s not overlook just how impressive this actually was. Alexander kicked the ball straight up, showed ridiculous burst to get himself back under the ball, and pulled it down without breaking stride.

Considering that he spent the vast majority of last year dealing with an injury, it seems as though Alexander is back at full strength and ready to wreak havoc in the secondary this fall. Maybe the Packers will even try him out as a kick returner after seeing him make a play on Saturday?