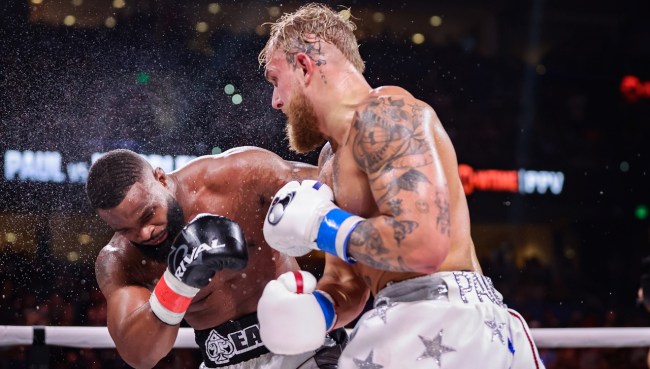 Jake Paul appeared to beat Tyron Woodley in convincing fashion months after a split decision win, but some fans still think there was something suspicious about how the fight ended.

On Saturday night, Paul viciously knocked out Woodley in the sixth round of their fight after Woodley dropped his left hand and got hit with a looping right hand.

He scores the KO win in the 6th round to stay unbeaten 💥#PaulWoodley pic.twitter.com/kxr4rG0SNB

Boxing fans are now analyzing the video of the KO to prove Woodley deliberately let Paul knock him out.

Im convinced this shit is rigged because there not way your dropping your hand like that #jakepaulvstyronwoodley pic.twitter.com/cdkuP7KUho

Some are convinced that Jake Paul gave Woodley a signal to drop his hand before the knockout blow.

Watch his right hand giving an signal? What the fuck was that #jakepaulvstyronwoodley was rigged. pic.twitter.com/UGLNlbiIYG

During his post-fight press conference, Woodley said that he had no idea why he dropped his hand.

“I went back and looked at it and I’m like why the fuck did I drop my hand? I knew it was coming, I was ready to block the overhand, I don’t know if he delayed it, even if he did delay it, I don’t know why I dropped my hand.”