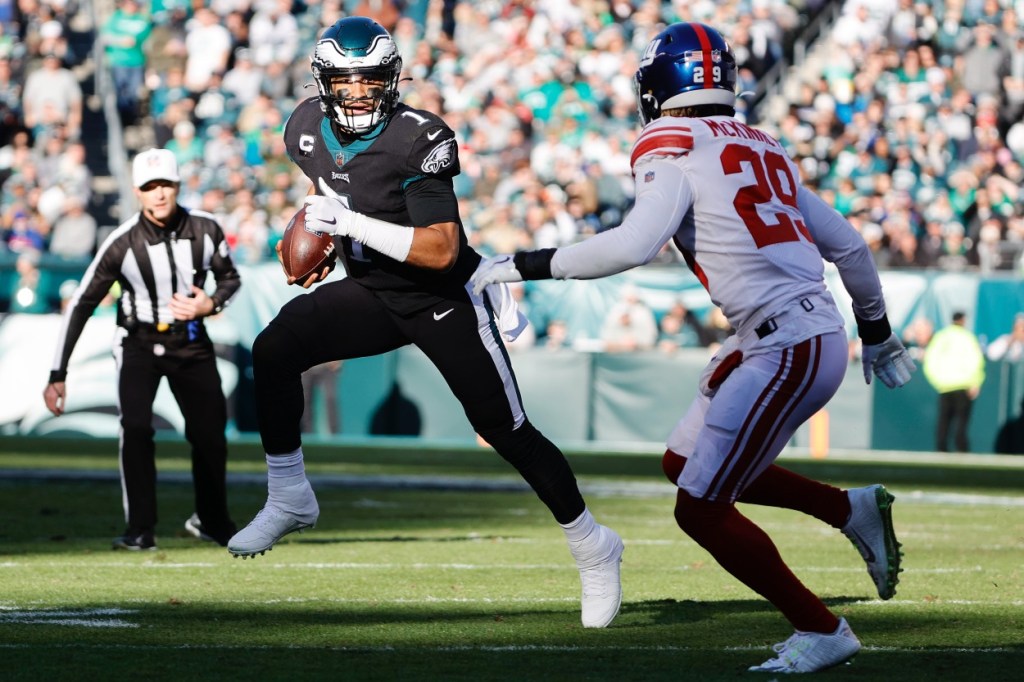 The Philadelphia Eagles are currently very much in the hunt for the playoffs. While the Dallas Cowboys clinched the NFC East with a dominating 56-14 win over Washington, the Eagles beat up the Giants 34-10 in Philly.

Eagles quarterback Jalen Hurts had a solid day. He was 17-for-29 and threw for 199 yards, 2 touchdowns, and 0 interceptions. And he could’ve thrown a third touchdown with relative ease if he’d spotted a wide-open Dallas Goedert in the end zone.

After the game, Philadelphia Inquirer reporter Jeff McLane asked Jalen Hurts about missing his wide-open tight end in the endzone. Jalen responded with one of the most detailed answers we’ve ever heard from him.

#Eagles QB Jalen Hurts just provided one of his most descriptive answers of the year when asked by @Jeff_McLane about missing a wide-open Dallas Goedert in the end zone.

Here’s what that play looked like, by the way, for more context:

Dallas Goedert open in the corner of the end zone on that 3rd-and-goal play. pic.twitter.com/BY3Pg9SW8R

This is a great instance of armchair quarterbacks chirping NFL players for something that seemed blatantly obvious on camera but the reality of it was infinitely more complex.

Jalen Hurts was able to immediately recall every detail of the broken coverage, who was involved in the play, and which mistakes led up to him not seeing Goedert open in the end zone.

It was a smart way to shut down the haters

Especially in more confined space in the red zone. Yes, I completely understand what that play looked like to most of us fans. Ppl need to remember NFL QBs are processing an insane amount of info in fractions of seconds and making the best calculated risk nearly every play

And that’s why most fans (and media) just don’t understand QB play and how offenses work.

If the first read is open, you throw the 1st read. That’s how the game is played.

Jalen Hurts currently has 2,390 yards on the season and has thrown for 16 TDs and 9 INTs. But the Eagles are in a playoffs position spot and that’s exactly where they want to be.

Philly finishes their season with games against Washington next week and Dallas on January 9th but the Cowboys have already clinched the division and will likely be resting starters then ahead of the playoffs so the season’s end looks bright for the Eagles.