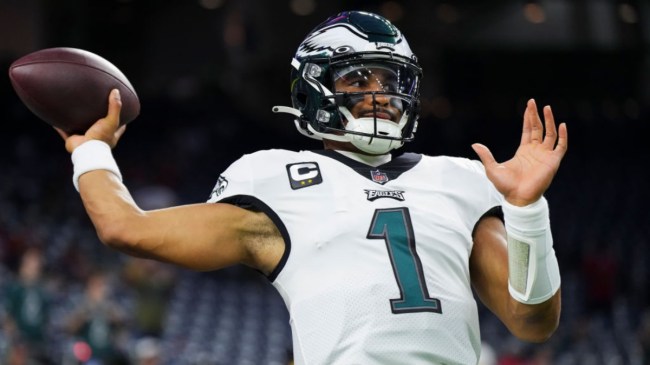 8 games into the 2022 season, Jalen Hurts has the Philadelphia Eagles looking like a contender. The Eagles are the last remaining undefeated team in the NFL at 8-0 and have won half of their games by double digits. They already hold wins over the Dallas Cowboys and the NFC North-leading Minnesota Vikings.

As the Eagles have put together this incredible start, Jalen Hurts has injected himself into the MVP conversation. In the Eagles’ 8 games, Hurts has thrown for 2042 yards and 12 touchdowns and has added another 326 yards and 6 touchdowns as a runner.

The success this season is the payoff for what was seen as a very surprising pick back in 2020. At the time, Carson Wentz was seemingly locked in as the franchise quarterback for the Eagles. That didn’t stop them from drafting Hurts in the 2nd round.

Today, Hurts revealed to the Kelce brothers that he was also surprised by the decision from the Eagles and thought that it was the Pittsburgh Steelers calling when he saw a Pennsylvania area code on draft night.

“I thought I was going to Pittsburgh … from the interview I didn’t think I was going to be an Eagle” 👀@JalenHurts spoke about his draft night experience for the first time with @JasonKelce and @tkelce pic.twitter.com/KlKI9ASTSq

At the time, the Steelers definitely seemed to be a team that made more sense to be drafting Hurts. Ben Roethlisberger was clearly nearing the end of his career and is now retired.

The Pittsburgh Steelers had the chance to pick Hurts, picking 4 spots ahead of the Eagles in the 2nd round of that draft. Instead, they used that pick to select Chase Claypool, who they have since traded to the Chicago Bears.

The Eagles must be pretty happy the Steelers made that decision.