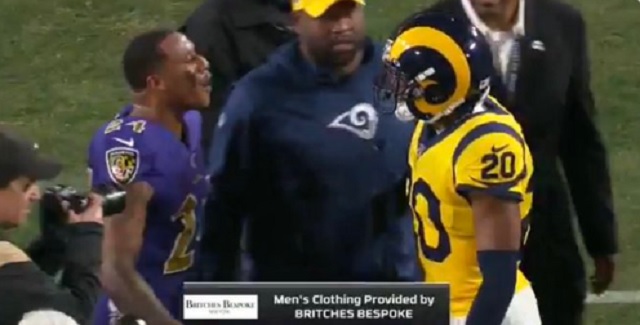 During the Rams-Ravens Monday Night game, Peters mocked Ramsey on the sideline after picking off Jared Goff.

Marcus Peters was yelling "Jalen!" from the sideline after his interception 💀 pic.twitter.com/CtN4O1SBWk

After the Ravens beat the Rams. both Peters and Ramsey got into a heated exchange on the field and to be physically separated.

Marcus Peters and Jalen Ramsey getting heated after game pic.twitter.com/mykS1kOD4o

Looks like Jalen Ramsay was displeased with the outcome tonight in Los Angeles. #Ravens #Rams pic.twitter.com/HSpt2oCWoz

Apparently, Peters continued talking trash while leaving the field and Ramsey waited for him in the tunnel but was held back by security personnel

Peters screaming as he walks down tunnel, talking about “kicking the Rams ass out of the playoffs.” Ramsey was waiting for him in tunnel but he was getting held back.

Jalen Ramsey and Marcus Peters were exchanging angry and profane words in the Coliseum tunnel after the game. Ramsey was being restrained by Rams personnel from getting back down the tunnel towards Peters.

After the game, Rams CB Jalen Ramsey was being restrained by Rams personnel in the tunnel while shouting at Ravens players and staff going into their locker room. @NBCLA pic.twitter.com/UD7j9R1ycF