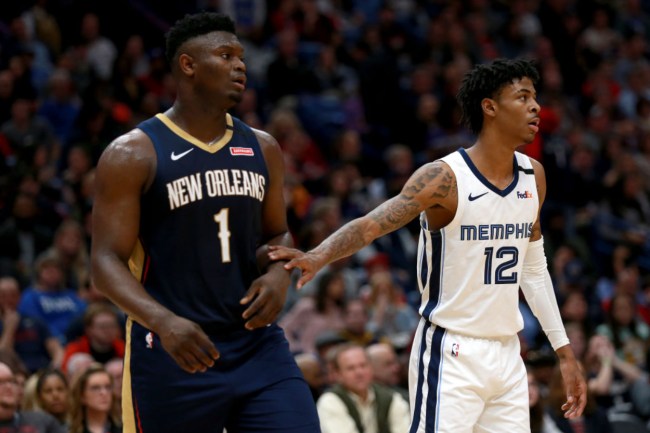 Nobody knows what the future holds for Zion Williamson, he may not even know himself at this point. All we do know is that he isn’t expected to play this season despite making progress on his injured foot.

With Williamson’s future completely up in the air, rumors and speculation about what’s next for the big man have started to pick up. Some folks are already penciling in that Williamson could be looking to leave New Orleans given how poorly things have been up to this point. The majority of those same people believe Williamson could look to move to a bigger market, like New York or Los Angeles, but not Jalen Rose.

Rose thinks there is another team Williamson could land with in the near future, and that team is the Memphis Grizzlies.

During Tuesday’s edition of ‘Jalen and Jacoby,’ Rose was asked if there was any chance Williamson could change teams in two years, which is when he unloaded his Grizzlies remark.

“Since you want broken news, here you go,” Rose began. “I want Zion to stay with the Pelicans, but if Zion leaves I’ll give you a destination. It ain’t New York, it ain’t with the Lakers, it’s gotta be Memphis.”

David Jacoby was shocked by the words that came out of Rose’s mouth and asked him if there was real potential in the idea of Zion to Memphis.

Rose speculating that Zion could leave the Pelicans to play with Ja Morant in Memphis could be simply that, speculation. Or, Rose has had some conversations with some people in the know where Williamson to Memphis could be a legitimate possibility.

As Jason Smith and John Martin broke down on ESPN 92.9 in Memphis on Wednesday, Rose has said some things in the past a little prematurely that turned out to be true.

Smith specifically points to the fact that Rose was one of the first people to predict the Memphis Tigers were going to land both Emoni Bates and Jalen Duren out of high school. Rose also was one of the first to say Chris Paul would be returning to the floor before anyone knew he actually would be.

The Grizzlies are already one of the most fun teams in the NBA, but if a healthy Williamson linked up with Morant, that would take things to uncharted territory.