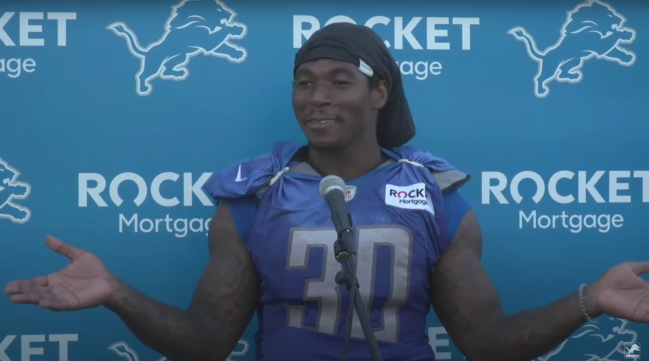 Jamaal Williams begs the haters to keep doubting the Detroit Lions. The fifth-year running back out of BYU has turned a new chapter of his career in Michigan and is off to a great start.

After four years with the Green Bay Packers, Williams signed a two-year deal with the Lions and had everybody on notice at training camp. He also had the media laughing after forcing a game of rock, paper scissors amongst reporters.

Two reporters tried asking the 27-year-old a question at the same time and Williams made them duke it out.

When at first they weren’t interested, he insisted. He made then got just 1 out of 1, but he had them go best of three. It was hilarious.

Football wise, Williams encourages people who doubt the Lions and looks forward to proving them wrong.

“Underestimate us,” he said. “Please, please! That’s what we want. Cause then we’ll be coming and smack you in the mouth and you gonna know we the Lions.”

Whether the Lions turn it around in 2021 or not, they have one of the funniest players in the league.