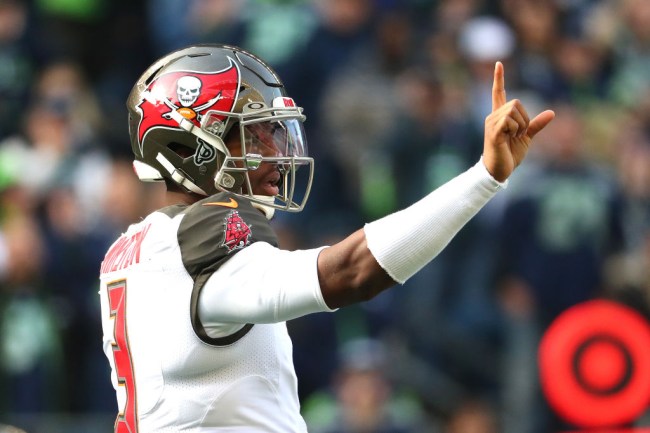 Jameis Winston never fails to be entertaining. Whether it’s him lighting up a defense like we saw against the Rams when he threw for four touchdowns in Week 4 or the script is flipped and we see him throw five picks like he did against Carolina a few weeks back, the man is more often than not in the spotlight.

But there’s also a different – and arguably the best – type of entertainment that Winston gives us and it’s when a mic is in front of him.

He’s delivered a countless number of all-time soundbites over the years. Whether it be the famous ‘we strong‘ quote at Florida State or eating W’s a few years back, Winston can bring the heat when it comes to metaphors and on Sunday following Tampa Bay’s loss in Seattle he came through yet again.

Just moments after the Bucs lost a tough one in overtime to the Seahawks, Winston talked about Tampa Bay’s glass being half full of water, but also always full because the other half is full of air. Yeah, we don’t know either.

Video: Bucs’ Jameis Winston, asked about the glass being half full after fourth straight loss, says the glass is always full, but “still full with air.” pic.twitter.com/7bFhmwt2wY

For those that didn’t really follow that quote, here it is in written form: “The glass is always full. Just because it might be half full of water, it’s still full of air. So we’ve got to keep that glass full, got to keep a chip on our shoulder and we’ve got to find a way to win.”

To this I raise a question: are glasses ever actually empty, because with Winston’s logic of air always filling the open space in glasses then they’re never empty.

My goodness, the man’s mind just ticks at a different pace than everyone else’s.

Winston had a great game against Seattle going 29-for-40 through the air for 335 yards and two touchdowns, but that isn’t the takeaway here, it’s the mind-blowing quote he delivered postgame.