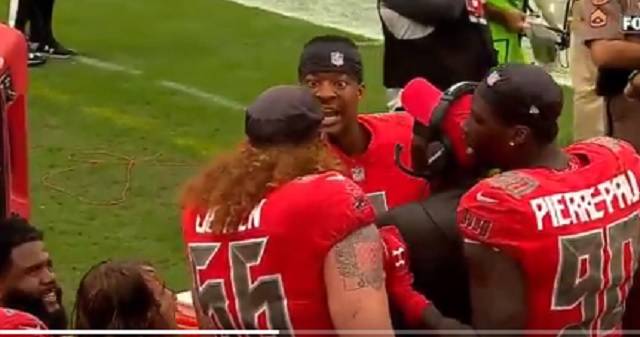 Things got a bit heated on the sideline during today’s Bucs-Saints game.

Watch as Jameis Winston has to be restrained by Bucs coaches after getting in center Ryan Jensen’s face after Jensen picked up an Unnecessary roughness penalty on the field.

Wow Jameis Winston and his center, Ryan Jensen, getting into it on the sidelines. Not sure I’ve seen that before during a game.

Bucs quarterback Jameis Winston is going off on center Ryan Jensen after his unnecessary roughness penalty. Jensen had two penalties on that drive (his second was a holding call). Donovan Smith also had a false start. https://t.co/BxofU2byU9

Jameis Winston and the Buccaneers are doing just fine.pic.twitter.com/XuCcHdAjQa

Yeah, Ryan Jensen committed a selfish Unnecessary Roughness Penalty which has been a theme with him. Jameis was right to do this.

I DONT LIKE RYAN JENSEN HE IS ALWAYS STARTING SHIT AND COSTING US YARDS. #GoBucs

He is doing the right thing. Every game our center gets called for something similar. Late hits, fighting, stupid available sh**