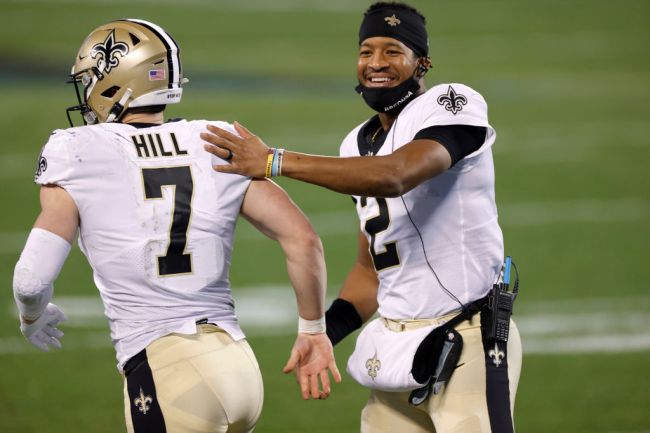 It appears that the quarterback competition in New Orleans is already over.

On Monday night, Jameis Winston took to the field and had an extremely impressive showing against the Jaguars in the Saints’ second preseason game of the year.

In one quarter of play, Winston went 9-11 for 123 yards and two touchdowns. Both of Winston’s touchdowns were deep passes thrown to Marquez Callaway.

Holy moly! Marquez Callaway SOMEHOW came down with this for a TD. Jameis Winston with the deep ball. pic.twitter.com/unp5g0y9kM

He did it again: Marquez Callaway and Jameis Winston is a 🔥🔥🔥 connection.

Callaway was an undrafted free agent in 2020. He's going off tonight. pic.twitter.com/aOPXq1caUD

Hill came into the game to replace Winston and got a three and out.

Saints fans went on to immediately declare Jameis Winston QB1 over Hill after seeing both QBs play on Monday.

I think the answer is clear at QB. Hill can certainly affect the game and be a playmaker all over the field. But Jameis Winston is the Saints’ QB1. ⚜️

at this point it's laughable to have a discussion of Hill and Winston, Hill is just a joke

why do we need to make excuses for Taysom Hill in this "QB battle"?

he started the first preseason game

Jameis had to play with the backups in week 1

it was Jameis turn to start tonight

Jameis has to be the new starting quarterback for the New Orleans Saints.