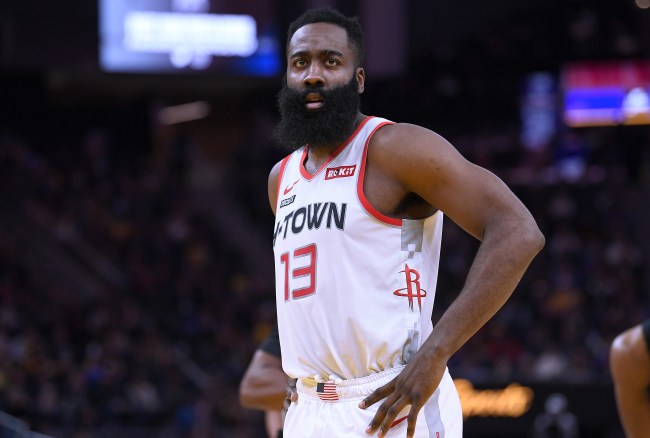 It seems like James Harden is going to get what he wished for and is on his way out of Houston after pissing off his teammates to the point where the Rockets can’t stand him being around the team anymore.

On Tuesday night the Rockets got blown out by the Lakers and it was clear that Harden was not giving much effort.

It's really hard to gameplan offensive adjustments when your best player refuses to get involved in half of the plays. John Wall can be just as bad for it, but he looks right at James Harden here for a good second after he penetrates like 'hey James, wanna join in this one?' Nah. pic.twitter.com/MEhcS2Aoro

After the game, a frustrated John Wall openly called out Harden for quitting on the team nine games into the season.

“At the end of the day, a lot of guys here want to compete at a high level

And like I told everybody tonight, and I told the guys before, when the one-through-15 guys are all on the same page and they’re committing, they’re knowing their roles and they know what they want to do (and) they know what they want to get out of this – and that’s to win – you all will be fine. But when you have certain guys in the mix who don’t want to buy in all as one, it’s gonna be hard to do anything special or do anything good as a basketball team.

“I’ve been on those teams in my 11 years I’ve been in the league. I’ve been on teams like that in my first five years where it was all about ‘me, me, me, me,’ and not about the team, and that hurts and that brings everybody down. So if we get all on the same page, we can be something good here. But we can’t dwell down on it because it’s only been nine games. Like, come on man. You want to jump off the cliff off of nine games? There’s a lot of basketball still to be played.”

Harden responded by saying the situation in Houston was beyond repair and could not be fixed.

James Harden asked if he’s surprised the #Rockets didn’t make a run: “We’re just not good enough..Chemistry, talent-wise, everything. It’s clear..I love this city I’ve literally done everything that I can..It’s crazy. It’s something that I don’t think can be fixed.” pic.twitter.com/1bbfrytyUj

Apparently, the situation with Harden is so toxic that the team is telling him to stay home as they weigh-in on trade offers from the Brooklyn Nets and the Philadelphia 76ers.

DeMarcus Cousins: "My interest is to play with John Wall, to be brutally honest. …The (Harden) disrespect started way before. This isn't something that, you know, all of a sudden started last night. …It's completely unfair to the rest of the guys in the locker room."

Rockets coach Stephen Silas said James Harden was not at practice today. "We felt that it was best for the group and best for James not to come to practice."

The Rockets are planning to keep Harden away until a trade is done — with front office weighing best final offers from Brooklyn and Philadelphia, sources tell @ramonashelburne and me. Process is moving quickly now. https://t.co/YDZkAKcG5d

According to The Athletic’s Shams Charania, the Nets are offering a slew of first-round picks for Harden.

Sources tell The Athletic the Rockets are sifting through offers on a potential James Harden deal from two teams — the Brooklyn Nets and Philadelphia 76ers — that could culminate quickly.

The Nets have prepared a package to Houston for Harden featuring all of their four future first-round picks and three future pick swaps, multiple sources said.

The Rockets are reportedly asking for Ben Simmons and Tyrese Maxey from the Sixers in a trade for Harden.

Houston is increasingly determined to complete a James Harden trade as soon as today, league sources say, and has chased the promising Maxey in addition to Simmons