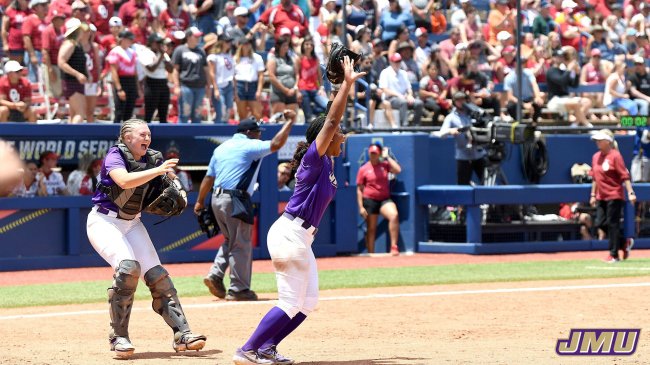 James Madison University softball is no slouch. The Dukes have made eight-straight NCAA tournaments and reached a Super Regional in 2016 and 2019. However, until this year, they had not reached the Women’s College World Series.

Despite the team’s one-loss record in the regular season, JMU was not selected as one of the top-16 seeds for the post season. As a result, the school did not host a regional and traveled to Knoxville, Tenn. to face No. 9 Tennessee, Liberty and Eastern Kentucky. The Dukes went 3-0 to sweep the Regional and advanced to play No. 8 Missouri in the three-game Super Regional series.

Friday saw a 2-1 win and Saturday saw a 1-7 loss, setting up an all-important Game 3 with a WCWS birth on the line. James Madison flipped the script on Sunday with a 7-2 win to clinch the program’s first-ever WCWS appearance on the road.

Of the seven other teams in the field, all but JMU had made an appearance in Oklahoma City. As the lowest-ranked team, the Dukes were tasked with top-seeded Oklahoma to begin their first chance at a national championship in front of a full crowd.

It was a tough draw and it started out in favor of the Sooners with great defense.

And then the momentum shifted. James Madison opened the scoring with a three-run BOMB.

The lead didn’t last long, as Oklahoma answered with a three-run shot of its own.

NATIONAL FRESHMAN OF THE YEAR! 💥 @_tiarejennings

And then things got tense. Both teams were doing everything they could to keep runners off of the base path.

Tied at 3 through seven innings, it would take extra innings to decide a winner. Kate Gordon, who struggled throughout the postseason, got hot at the right time and gave her team the lead.

Kate Gordon gives the Dukes the lead in the 8th! 💣

From there, it was all Odicci Alexander in the circle. She carried a 1.28 ERA all season and retired the last three Sooner hitters to give James Madison its first-ever Women’s College World Series win in its first-ever WCWS game.

"That was passion."@2seas__ shares how @JMUSoftball was able to upset (1) Oklahoma and collect its first-ever #WCWS win. pic.twitter.com/fg4NG4kV9k

JMU will face the winner of No. 5-seed Oklahoma State and fellow unseeded opponent Georgia in the winner’s bracket.