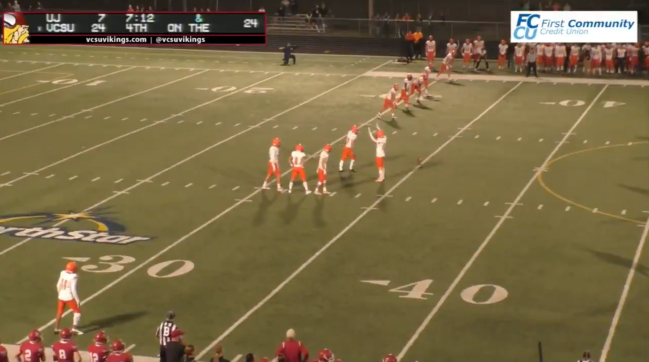 The wait is over. College football has returned.

After a long, tumultuous 2020 season that was marred by COVID-19, fans are in the stands, bands are booming and pats are smacking. The University of Jamestown began its 2021 campaign on Thursday evening and started things off in embarrassing fashion.

The private liberal arts school in North Dakota fell behind 24-7 in the fourth quarter against the Valley City Vikings. In an effort to get the ball back, the Jimmies lined up for an onside kick.

Everything about the attempt was terrible. It starts off with a strange, unconventional formation that overcomplicates the task at hand.

And then, with his back turned to the football and the field, a player signals for the kick to begin. His team moves forward with hopes of recovering the ball, but they are unable to do so because the ball managed to go backwards.

The kicker got his foot on the ball and actually pushed it the wrong way. An onside kick attempt must travel at least 10 yards forward, so the whistle blew the play dead.

On the call, the announcer in the booth gives an epic call. He tries so hard to be excited about the attempt before stifling a laugh and calls it one of the most awkward onside kicks you will ever see.

This is probably the worst onside kick ever pic.twitter.com/FDN7KC9wDu

Valley City was unable to capitalize on the terrible, terrible kick and the clock hit zero with a final score of 24-7. College football is so back.