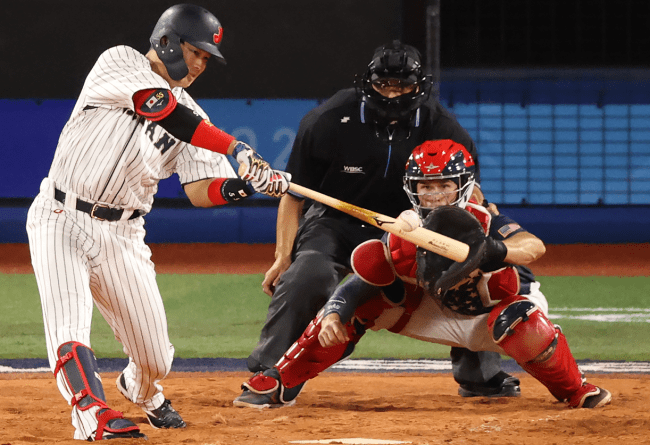 New York Yankees slugger Aaron Judge isn’t the only one chasing home run history this summer. Over on the other side of the world, Munetaka Murakami of the Tokyo Yakult Swallows in Japan, is just five home runs shy of tying the Nippon Professional Baseball league’s single-season record.

The 22-year-old third baseman hit two home runs last Tuesday, giving him 55 on the year. That ties Murakami with the legendary Sadaharu Oh for the most home runs ever hit by a Japanese-born player in a single season.

Second of the game for Munetaka Murakami to give him 55 on the year!

Naturally, Murakami’s home run chase has been compared to the one being conducted by Aaron Judge in America.

Much like Judge, who is now 20 home runs ahead of second place on this year’s list of home run leaders, Murakami too is dominating the record book this season. The next closest to him on the NPB home run list this season has 39. Murakami also has 132 RBI, 47 more than second on the list.

In 131 games so far this year, the left-handed Central League MVP is batting .330 with a .745 slugging percentage and has even thrown in 12 stolen bases for good measure. He now has 176 home runs in his five seasons in the NPB.

Many Major League Baseball fans, especially those in New York, are salivating at the prospect of Munetaka Murakami hitting for their team

“Imagine this guy taking hacks at the short porch in right field? Or him and Aaron Judge back-to-back in the order? My goodness,” wrote James Kratch of Elite Sports NY.

According to MLB.com, “Japanese baseball observers don’t expect the Swallows to make Murakami available to MLB teams through the posting process anytime soon.”

“Last year, I thought he was great,” said Swallows starter Cy Sneed. “You saw his eye getting better. He was laying off pitches off the plate. You could see the wheels starting to turn. You had to remind yourself that he was only 21 years old.