You Probably Didn’t See Any Of The Japan Skins Match, But You Need To Watch Jason Day’s Sand Save With Nothing But A 6-Iron 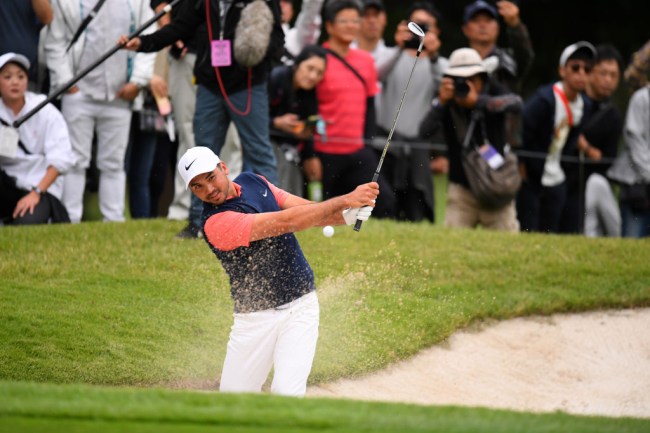 In what was a rather under-hyped event, Tiger Woods, Jason Day, Rory McIlroy and Hideki Matsuyama competed in MGM Resorts The Challenge: Japan Skins on Monday.

The event was centered around Woods and company playing in the inaugural Zozo Championship later this week, but with the obvious time difference, it wasn’t the easiest thing to watch in the United States and various other parts of the world.

Day was the big winner of the event taking home $210,000 and pulled off an extremely impressive sand save with a 6-iron on the Par 5 14th.

There were various challenges throughout the day and on the 14th, players could only use one club for the entire hole including on the greens. Day and Matsuyama elected for 6-irons while Woods picked 5-iron and McIlroy grabbed his 4-iron.

While every player not named Matsuyama was able to make par on the hole, none were more impressive than Day’s. The Australian found a deep greenside bunker with his third shot but showed off his sand game with the long-iron.

Jason Day, from a bunker, with a long iron. 😍 pic.twitter.com/X5hXEOEWzB

That shot is not as easy as Day made it look. After the impressive bunker shot, he walked up and sunk the six-foot par putt with his six-iron as well. It just goes to show even in extremely unique situations, these guys are in a different stratosphere than anybody else around the greens.

I’m not saying Day would get up and down from there with a six-iron more often than not, but he’d likely pull it off more often than we’d think. The man did have the No. 4 sand-save percentage on Tour a year ago.

When it was all said and done, Day took home the fattest purse while McIlroy and Woods each took home $60,000 and Matsuyama picked up $20,000.