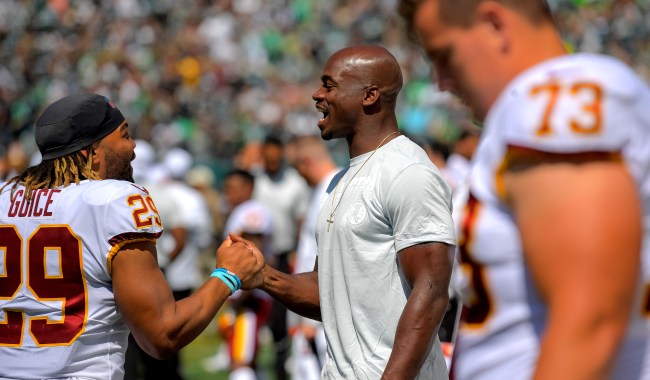 Despite leading Washington in rushing yards with 1,042 yards and seven touchdowns in 2018, running back Adrian Peterson was inactive despite being healthy and in street clothes on the sidelines of the Redskins’ 32-27 comeback loss to the Phialdelphia Eagles.

Instead, head coach Jay Gruden decided to have Derrius Guice, Chris Thompson, and Wendell Smallwood active as the team’s running backs. The three backs ended up combining for 28 yards rushing on 13 carries as the Redskins blew a 17-point lead to take their first L of the season.

Following the game, Gruden was asked why the 34-year-old future Hall of Famer, who played all 16 games in 2018, was a healthy scratch. His response does not bode well for the rest of Peterson’s season as long as he is on the Redskins’ roster.

“He’s a first-second-down back. So is Derrius,” Gruden told the media. “So, really, what do we have? About 20 first downs a game. Probably eight of those are passes, 12 of those might be runs, and Derrius can handle those 12…so if we have a game where we think we can run the ball 55 times in a game in an I-formation, then sure, I’ll get him up.”

While he said there's a place for him on this team, this is a kinda tough quote from Jay on AP's role moving forward. Full below, but ends with this:

"If we have a game where we think we can run the ball 55 times in a game in I-Formation then sure I’ll get him up." pic.twitter.com/G9h8Njdic2

That quote comes on the heels of a report by 106.7 The Fan in Washington that Gruden wanted to cut Peterson before the season began.

“AP likes to get in Jay’s ear if he’s not playing. And Jay doesn’t want to deal with it,” radio show host Jason Bishop said. “And that’s a well-placed source that told us that. And so there was a fight… apparently, there was some sort of a disagreement on Saturday over (at Redskins) Park about it.”

Peterson, who just signed a new two-year, $8 million deal with Washington in March, was asked about being inactive following the game and appeared to be at a loss, according to Kareem Copeland of the Washington Post.

He's back for more. #HTTR pic.twitter.com/6u8SyNpCS5

“It’s my first time ever being inactive, a healthy scratch. It was tough, of course. I’m a super competitior. I’ve been thinking about playing these guys since last year since the season ended and they broke us off. So it was tough not being out there, so I just have to make the best out of the situation, and in that way, I just become a coach on the sideline. Helping the guys out as much as I could, and cheering for the guys as well.”

On Monday, in an interview with 106.7 The Fan, Washington offensive tackle Morgan Moses did not hold back in ripping the decision to not have Peterson on the active roster.

“Any time you’ve got a Hall of Fame guy that doesn’t dress, man, it’s a slap in the face,” said Moses. “And obviously, we’ve gotta figure out what the reason is. And it’s my job as one of the older guys on the offensive line to speak up and say, ‘Hey, we need him.’ Obviously, you don’t put a Hall of Fame guy like that on the sideline. When he’s healthy, as well.”

Moses added that he wasn’t the only one on the Redskins’ roster who was upset by Peterson’s benching.

From @NFLGameDay: The #Redskins‘ making Adrian Peterson inactive today vs. the #Eagles didn’t sit well with veterans in the locker room. Watch this one. pic.twitter.com/MISX7KoKWU

Sources: #Redskins RB Derrius Guice had an MRI this morning on the other, non-ACL knee and he’s likely to miss some time. The hope is he does not need surgery, but the team is doing a full evaluation. He gained 18 yards on 10 carries, looking like he wasn’t himself.