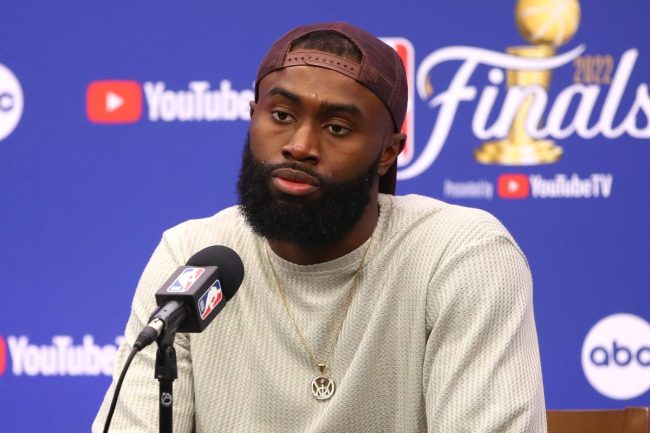 Jaylen Brown has been linked to a potential trade package between the Boston Celtics and Brookly Nets. That trade involves Boston landing star scorer Kevin Durant with the Celtics using Brown as a centerpiece to give to Brooklyn.

NBA insider Adrian Wojranowksi originally broke the report, saying Monday morning that the Celtics had emerged as a possible suitor in the Kevin Durant sweepstakes. Whoever winds up taking a chance on Durant must be willing to give up a lot in return for the superstar.

Boston’s ability to include All-Star forward Jaylen Brown as a centerpiece in offers does help make the team formidable in its pursuit, sources said.

Talks of a potential trade for Durant have slowed since he initially requested to be dealt from the team. It appears that organizations are not willing to match what the Nets are asking.

Insider Shams Charania actually said that the Celtics have already made an offer to Brooklyn, but that the deal got shot down with the Nets wanting more.

Word has gotten back to Brown on his potentially being traded to Brooklyn, and he’s now responded on social media.

Brown responded to the rumors surrounding a possible trade for Kevin Durant. Here’s what he had to say on Twitter.

Short and to the point, though the meaning of the tweet is up for debate. Is he frustrated with the trade talks, or does he know he’s on his way out of Boston?

Fans are beginning to post their reactions to his response, too.

Love you JB. But you gotta understand G! pic.twitter.com/7SAUZ61LnT

We’ll see if this rumor has any legs, or if it’s just the latest hearsay in a long line of Durant speculation. Whatever the case, Brown doesn’t seem to be happy with his connection to the gossip.