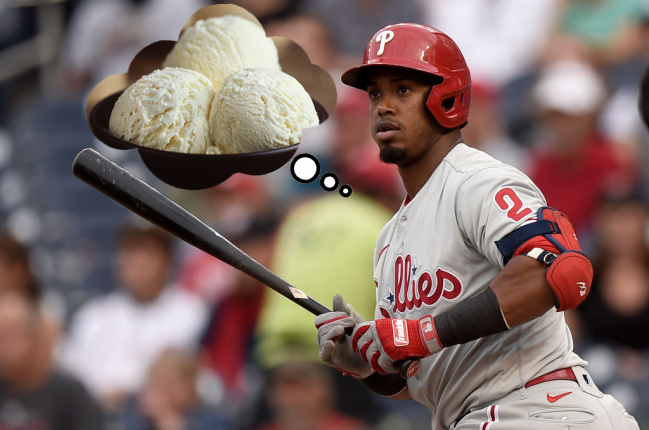 I scream, you scream, Jean Segura screams for ice cream…. in the middle of an at-bat!

During the Philadelphia Phillies’ game against the Washington Nationals on Monday night, the 31-year-old made that clear. He stepped up to the dish in the top of the 9th inning with the tying and go-ahead runners on base before declaring where his ice cream allegiance lies.

It was a big spot for the team and Segura needed to step up big.

Nats pitcher Wander Suero delivered the first pitch for a ball and was setting up to deliver his 1-0 offering when a fan chimed in from somewhere in the Nationals Park. For whatever reason, said fan decided to ask a question that was surely not on anyone’s mind.

“SEGURA, WHAT’S YOUR FAVORITE ICE CREAM FLAVOR?” he or she bellowed.

Despite the pressure of the moment, the Phillies’ second baseman wasn’t about to use it as an excuse. Rather than dodging the question, Segura answered “vanilla” with a huge smile.

You've heard of athletes with ice in their veins?

Jean Segura has 𝙞𝙘𝙚 𝙘𝙧𝙚𝙖𝙢 in his veins – vanilla ice cream, to be specific 🍦😂 pic.twitter.com/uqONCNwF0I

The next pitch was a 92mph cutter for a called strike. With the count even, Segura sent the next pitch to left field for a game-tying RBI double.

It is no secret that Segura plays loose and without taking himself too seriously. However, to respond to a fan in the middle of an at-bat is a next level of relaxed.

To do so in the middle of such an important plate appearance is ice cold. Some might say that he has — vanilla — ice cream in his veins.

Thank you, I will be here all day.