Jeff George Jr. Says He’s ‘Willing To Put His Life On The Line’ For A Shot In The NFL 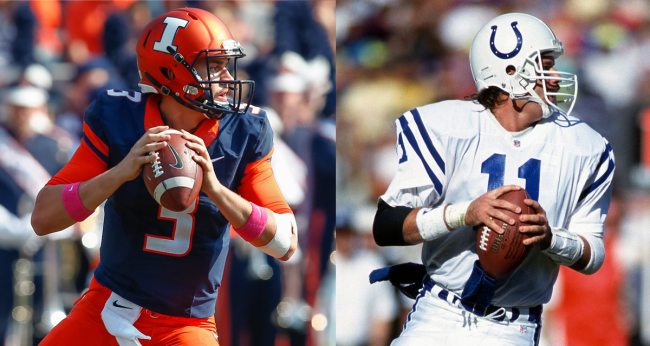 Being the son of a professional athlete in one of the big three sports usually goes one of two ways. Either the son gets the dad’s physical gifts and takes well to the type of training needed to excel (e.g. Ken Griffey Jr., Kobe Bryant, Peyton and Eli Manning). Or they try their hardest to follow in their dad’s footsteps, but just simply don’t have the attributes needed to play at the highest level (e.g. Pete Rose Jr., Marcus Jordan, Nate Montana).

Quarterback Jeff George, Jr. is hoping to be one of the former.

Jeff George, Sr. was the first overall pick in the 1990 NFL Draft by the Colts after a successful three-year college career at Purdue and Illinois and ended up playing 12 seasons for Indianapolis, Atlanta, Oakland, Minnesota, and Washington.

This week, the 24-year-old spoke to TMZ Sports about the comparisons to his famous father and what he would be willing to do for a shot at playing in the NFL, and it’s a lot.

“It’s something that I’ve definitely gotten used to and I embrace it,” said George. “I understand who I am and I’m proud to be … for everything my dad’s done and proud to be who I am. But at the same time too, I know that I’m me. My dad had the unbelievable career that he did, but I know I’m a different person than him. So I’m just trying to pave my way and try to make something happen for me as well.”

George was then asked what advice his dad has been giving him in the leadup to the NFL Draft.

“Just not to get into the comparison games,” he replied. “It’s easy to to sit there and compare to, ‘oh, this guy’s coming out, this guy had this,’ but at the end of the day you’re competing against yourself. You got to do the best that you can and only worry about what you can control.

“And ultimately too, with my situation being a little different, I’m not going to be the number one pick in the draft like he was, but at the same time his best advice he gave me was that it only takes one team to like you. You don’t need to impress every team. Not every single team is going to like you. They got different schemes, different personnel that they have, but all it takes is one and when you get that one you gotta know make the most of your opportunity and ultimately perform.”

George then talked about how his dad has helped him and his younger brother, a quarterback at Alabama, and how Sr. is “old school” yet very supportive.

As for what a NFL team that takes a chance on him will be getting if they draft him this year, George says, “They’re getting a guy that’s willing to put his life on the line for this. I don’t want to do anything else. I put my blood, sweat, tears into this game. I love it more than anything.

“You’re going to get a guy that’s the hardest worker in the building, super competitive, and ultimately, has a drive to win.”

He’s certainly got he pedigree, but Jr. is sorely lacking in the resume department. It will certainly be interesting to see if any team gives him a chance.