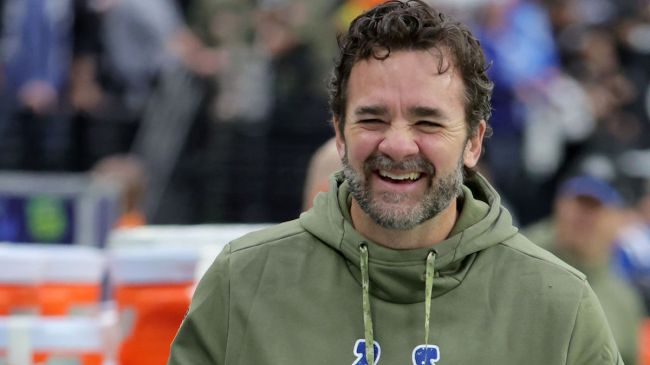 Despite the fact that Jeff Saturday never had any previous collegiate or professional coaching experience, the Indianapolis Colts hired him anyway.

And while the team and owned Jim Irsay was criticized from virtually all angles leading into Sunday’s game — pundits seem to have forgotten that the Colts are Jim Irsay’s team and so long as he isn’t breaking the rules, he can do whatever the hell he wants — the decision to hire Saturday has been vindicated, at least for this week.

Coaching in his first-ever NFL game, the 47-year-old former Pro Bowl center lead the Indianapolis Colts into Las Vegas where they beat the Raiders by a score of 25-20. Following the electric victory, Saturday gave an epic postgame victory speech in the locker room that further highlighted the strengths he *does* have as a coach, and that’s leadership.

Saturday might’ve lucked out by playing the Raiders, one of the league’s worst teams, in his first game, but the degree of difficulty will undoubtedly increase next week when the Colts host the (currently undefeated) Philadelphia Eagles.

Given that the AFC South-leading Tennessee Titans also won on Sunday (they beat the equally pathetic Denver Broncos), Saturday — who made the decision to reinstall Matt Ryan as the team’s starting signal-caller — and the Colts remain two games back in the race for the division title.

As for the AFC Wild Card race, the 4-5-1 Colts currently trailer the Cincinnati Bengals, Los Angeles Chargers, and New England Patriots for the 7th and final playoff berth. To close out their 2022 season, the Colts have games against the Eagles, Steelers, Cowboys, Vikings, Chargers, Giants, and Texans.