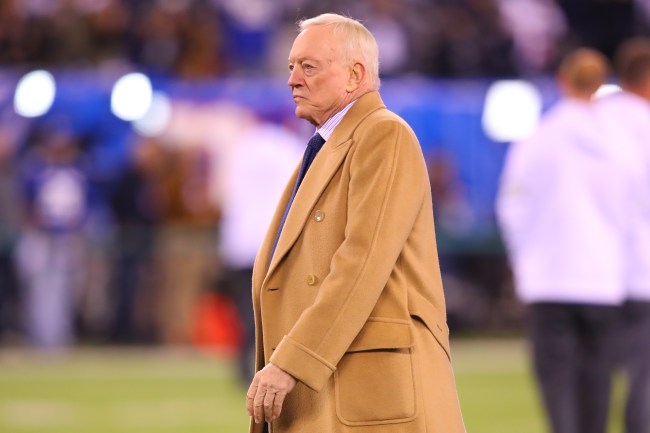 The Dallas Cowboys are in a rut and Jerry Jones doesn’t seem to be handling things well at the moment.

Jones made his local radio appearance on WFAN on Friday morning after the Cowboys got crushed on ‘Thursday Night Football’ by the Bears and things got heated pretty quickly when he was immediately asked about the team’s poor play and Jason Garrett’s job security.

Jerry Jones to start his @1053thefan interview when asked if he’s embarrassed: “Get your damn act together yourself. OK? Settle down just a little bit. … I don’t like your attitude to come in. I’ve been traveling all night and don’t have the patience to jack with you today.”

Here’s the audio clip and you can hear the anger in Jones’ voice when he was asked if the Cowboys were embarrassing him by their performance on the field.

Jerry Jones asked by hosts on ⁦@1053thefan⁩ if he’s “embarrassed” responded by saying “get your damn act together” and saying he doesn’t “have the patience to jack with you today.”

Jerry Jones on with 105.3 in Dallas at the top of the interview:

“Get your damn act together yourself OK? … Settle down just a little bit… I don’t like your attitude”

Later, when I asked if he understands questions about Garrett’s job:

“Do you understand bullshit?”

The radio show had to cut Jerry off for saying “do you understand bullshit” several times when he was asked about Garrett’s job status. He would later have to call back in and went on to take responsibility for Cowboys’ struggles.

“do you understand bullshit” -Jerry Jones on @1053thefan

Program director Gavin Spittle now saying a delay system in studio shuts down radio interview for repetitive curse words so because there were two back to back it dumped. He’s back on @1053thefan

Jerry Jones swore a couple times on the air this morning on @1053thefan. At one point, he said “bullshit” and the call dropped. He called back in, finished the interview. He said the teams’ problems ultimately fall on him. “I completely understand the fans’ frustration with me.”

As of now it doesn’t seem like Jerry is going to fire Garrett during the season but it appears that the Cowboys are looking at potential replacements.

Jerry Jones says Jason Garrett will remain the coach but I can confirm a very real interest in Urban Meyer. In fact, I'm told Stephen Jones spoke with him recently. Lincoln Riley remains a strong candidate & file this name as a possibility Clemson OC Tony Elliott per sources.

The Cowboys are the best reality show on television right now.