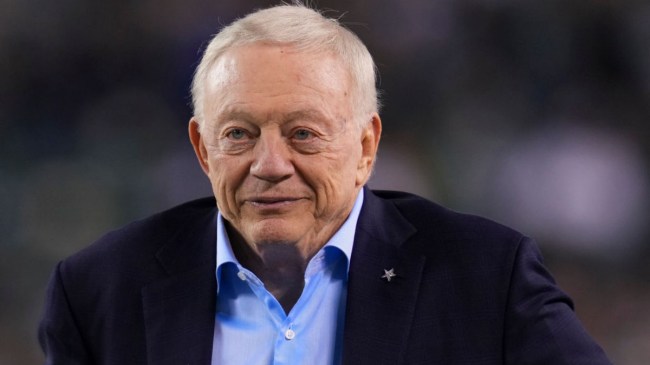 PHILADELPHIA, PA - OCTOBER 16: Owner Jerry Jones of the Dallas Cowboys looks on prior to the game against the Philadelphia Eagles at Lincoln Financial Field on October 16, 2022 in Philadelphia, Pennsylvania. (Photo by Mitchell Leff/Getty Images)

After the wild trades made throughout this NFL offseason that saw star after star changing teams, the trade deadline was going to need to be pretty exciting to measure up.

The San Francisco 49ers and Carolina Panthers have gotten things off to a strong start with the Panthers sending Christian McCaffrey west. The move should have some other contenders looking to make moves of their own to separate themselves in a crowded playoff picture in both conferences.

Today, Jerry Jones was asked about how he plans to handle the deadline for the Dallas Cowboys. He revealed that he doesn’t have any players specifically in mind for his team to make a move for, but that this is something that could change very quickly.

Cowboys owner Jerry Jones to @1053thefan on trading for a player before Nov. 1 deadline: “Absolutely nothing that involves a name of a player or a position that I’m seriously looking at, at this moment. Not one move. But could that change in 30 minutes? Of course it could.”

It’s not entirely surprising that Jones doesn’t have a specific name in mind right now. The Cowboys’ defense has been strong to start the season, leading the team to a 4-2 record despite the fact that Dak Prescott was unavailable for their last 5 games.

However, they haven’t really gotten a clear picture yet of what their offense will look like at full strength. There were questions during the offseason about their wide receiver situation during the offseason after the team traded Amari Cooper, leaving Michael Gallup as their WR2 as he worked his way back from an ACL injury.

He has yet to really establish himself as a reliable second option at receiver, so that could be a position the Cowboys look to address if the situation doesn’t begin to change with the return of Dak Prescott.

Even if he does know how right now, there’s always a chance that Jerry Jones makes sure football fans are entertained at the trade deadline.