For the past month Cowboys owner Jerry Jones has taken a hard stance against national anthem protesters and has threatened to punish of his players who “disrespected the flag” by kneeling during the anthem.

As it turns out, Jones was once called out by a fan for sitting out the anthem in letter to the editor from 1989 that was published in the Star-Telegram.

Via The Big Lead. 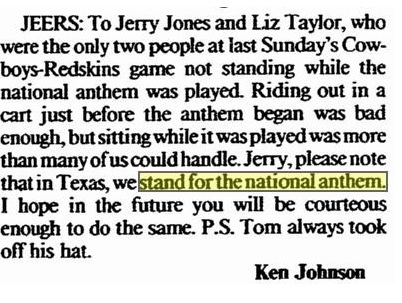 This is amazing on so many levels and just shows Jones’ hypocrisy in the entire national anthem debate.