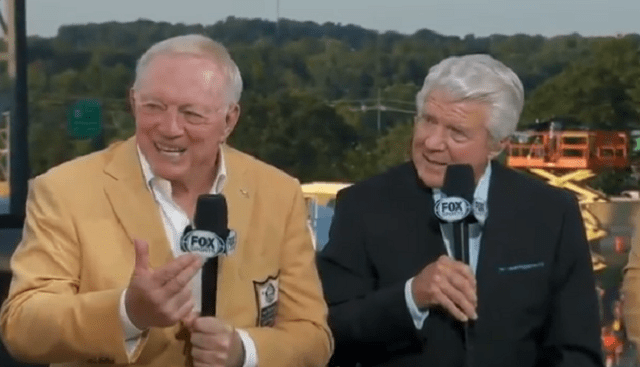 It’s been nearly 30 years since Jimmy Johnson won two Super Bowls for the Dallas Cowboys but due to a falling out with owner Jerry Jones he has never been invited to be a part of the team’s Ring of Honor.

On Thursday, before Fox’s Hall of Game between the Cowboys and the Bears, Johnson and Jones had an emotional reunion on live TV.

During Jones’ appearance, Fox’s Terry Bradshaw straight up put Jones on the spot and asked him if he was finally going to induct Johnson into the Cowboys Ring Of Honor.

After asking him multiple times if he was going to make an announcement, Jones finally relented and said he would include Johnson into the Ring of Honor.

Former @dallascowboys QB @TroyAikman and current owner Jerry Jones join the set to talk with new Hall of Famer @JimmyJohnson and inform him that he will be joining the Cowboys Ring of Honor! ⭐️ pic.twitter.com/bINdwBiikw

Fans gave Bradshaw props for putting Jones on the spot.

Terry Bradshaw is an absolute American hero for putting Jerry Jones on the spot re: Jimmy Johnson’s snub from the Cowboys Ring of Honor. I hope he follows through with the promise! pic.twitter.com/XzVujW4qoj

Terry Bradshaw just guilt tripped Jerry Jones in to putting Jimmy Johnson into the cowboy ring of fame. With all do respect Jerry . Coach is the man! Deserved to be up there a long time ago!

Terry Bradshaw- Cmon Jerry tell us when you’re inducting Jimmy into the ring of honor!

Thank you, Terry Bradshaw, for putting Jerruh on the spot! https://t.co/k5MyxgkICX