Brenden Rice, The Son Of Jerry Rice, Scored Two Touchdowns For Colorado And Might Be Bigger, Faster Than His Father 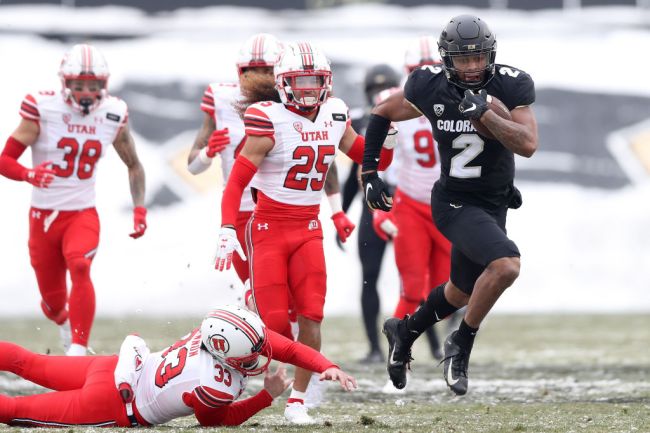 Colorado wide receiver Brendan Rice had himself a day against Utah. The son of NFL Hall of Fame wide receiver Jerry Rice scored two touchdowns on his only two touches of the game and did so in flashy fashion. At 6-foot-3, 205 pounds, he stands one inch and five pounds taller and has been recorded 0.1 seconds faster than his father’s 4.71 40-yard dash time. Both, however, are faster in-game than the numbers would indicate.

Late in the first half, Rice lined up to receive a Utes punt and went dashing through the snow for a virtually untouched for the 81 yards and six points. He put a nasty move on the punter even though he probably didn’t have to.

TOUCHDOWN 🙌@BrendenRice takes the punt ALL 👏 THE 👏 WAY 👏

On the first possession of the second half, head coach Karl Dorrell stuck with the hot hand, split Rice out wide and got him the ball. No. 2 caught the screen pass at the 39-yard line and slipped down the sideline, turning on the jets to score his second touchdown of the day. With his receiving score, he became the first Colorado player with a receiving touchdown and a punt return touchdown in a game over the last 25 seasons.

Rice is a true freshman and was rated a four-star recruit out of high school by Rivals. He hasn’t factored too much into Colorado’s game plan through the first five games of the season and has six catches for 120 yards but that could be quick to change if he keeps balling out like he did on Saturday.

Utah ended up winning the game 38-21 and shattered its opponent’s Pac 12 Championship hopes by ruining their undefeated season.