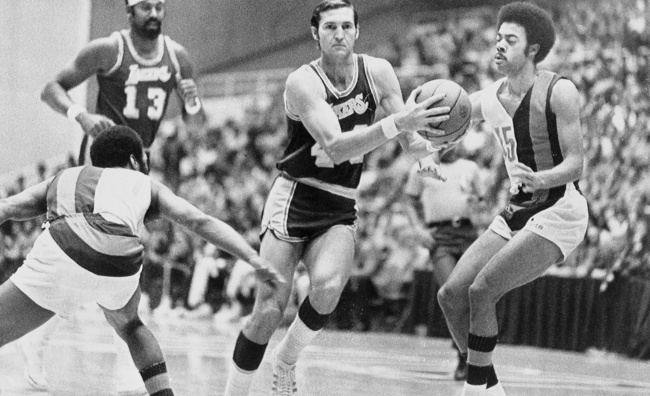 Jerry West is a no doubt basketball legend. Not only does the 14-time All-Star hold the NBA record for the highest points per game average in a playoff series at 46.3, he is the only player in NBA history to to be named Finals MVP despite being on the team that lost.

Oh yeah, he is also the league’s logo.

He was also a pretty good coach and executive.

As an executive, he led the Lakers to six NBA championships and was instrumental in the Lakers’ signing of Kobe Bryant, Shaquille O’Neal, and head coach Phil Jackson. All told, the Lakers ended up winning nine NBA titles with the teams West assembled.

However, according to a new interview published this week by The Athletic, Jerry West’s relationship with the Lakers is almost non-existent these days.

Last year, Lakers owner Jeanie Buss inexplicably left Jerry West off of the list of the top five most influential Lakers of all time. It truly made zero sense and West was flabbergasted by the slight.

“I saw the other day Jeanie Buss made a statement, the five most important Lakers, one of the most offensive things I’ve ever heard in my life. I was there a lot of times, had a lot of success. Be curious to know if they would have had that success if I hadn’t been there,” West told the Hoop Du Jour podcast last year.

“And I don’t ever take credit for stuff, I don’t. When I was around, maybe I was just a good luck charm. But I do know, that when this thing fell apart, there was a lot of years where they weren’t very good.”

Then, just to make matters even worse, West tells Sam Amick of The Athletic this week that, for some unknown reason, the Lakers repealed his lifetime season tickets, tickets which he said late Lakers owner Jerry Buss had given him.

Without any warning or explanation, his wife, Karen, received a text message from the Lakers last season informing her that the family’s seats for their games would no longer be granted.

The 83-year-old West has a freaking statue outside the Staples Center (don’t care if the name’s been changed) alongside Magic, Kareem, Shaq, Elgin Baylor, and five other legends.

“After nearly five decades as a player, coach and team executive, Jerry West is one of the true icons and legends that the game of basketball has ever known,” reads the statement accompanying his statue. “His fearless style of play and emotional, ‘wear his heart on his sleeve’ demeanor, made him a beloved figure to Lakers fans. One of the game’s all-time great players, Jerry was known during his playing days in the 1960s and early ’70s as Mr. Clutch for his propensity for hitting huge game-winning shots and his grace under pressure.”

But he can’t get free tickets to Lakers games? That’s just wrong.