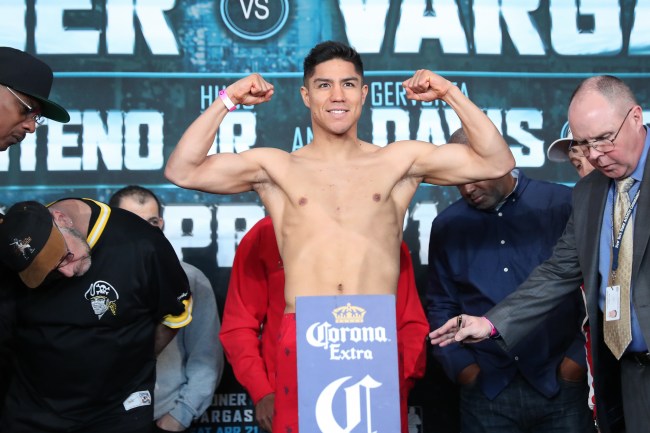 Jessie Vargas has fought the best in the sport (Manny Pacquiao, Timothy Bradley, Adrien Broner, etc.) and that trend continues this Saturday, February 29th as he steps into the ring with another extremely tough opponent in former welterweight champion Mikey Garcia for the prestigious WBC Diamond belt in a fight that will be streamed on DAZN.

😤 Mikey Garcia vs. Jessie Vargas is going to be a WAR Saturday night. pic.twitter.com/zapCjqV52h

We sat down with the 30-year-old Vargas (29-2-2, 11 KOs), who signed on to fight Garcia as a welterweight, a division he was planning on moving forward from when he last stopped Humberto Soto in April while weighing in at 150.4 lbs. for a 151-pound catchweight fight

I was just moving up to 154 pounds, I didn’t even make 154 in my last fight, I made 152 I believe. I was just on the verge of moving up, so I was basically right in between 147 and 154. I wasn’t a full super welterweight just yet and it helps me come down to 147. The minute my promoter and adviser they offered it to me I accepted it because I could make the weight, it was just going to be a little more strict that way I can bring down the weight properly but I’ve followed all the guidelines to make it down to 147.

Despite the weight cut, Vargas, who is now a veteran in the boxing game, says he’s having the best training camp of his career and provides details on how his experience is helping him get ready for his fight

This is the best training camp I’ve ever had in my career. My body is reacting very well with each and every training session. With all the technical plans that we have we can do plan A, plan B, and Plan C easily. I feel fully energized, I feel fully rejuvenated. Taking care of my body is the result of me feeling in this way. Boxing is life right now that’s literally what my life is about right now these last two months I’ve only been focused on training day by day, week by week, month by month. I think it’s a maturity that comes along with age. I know how to prioritize what’s important and right now I’m focused 100 percent on defeating Mikey Garcia.

Vargas’ opponent, the 32-year-old Mikey Garcia (39-1, 30 KOs), is one of the most accomplished fighters in pro boxing. He’s won world titles in four different weight classes including featherweight, junior lightweight, lightweight and junior welterweight. Garcia is coming into his fight with Vargas attempting to prove that he can hang with the best 147 pounders in the sport despite coming off A unanimous decision loss against Errol Spence Jr at welterweight back in March.

Can Mikey Garcia compete at 147? Can Jessie Vargas win the big fight?

Two men enter on Saturday, one question gets answered ✨ pic.twitter.com/PkgWo1ftUw

Vargas says he jumped at the chance to fight Garcia because he knows there are going to be eyeballs watching and he’s ready to put on a show for the audience that is going to tune in on Saturday night.

The world is going to be watching on February 29th, all eyes are on us that’s why I prepared so well for this fight because I want the world to see what I’m about. We are two fighters who are coming to perform at our best, we respect our professionnand we’re going to give fans their money’s worth. We’re going to give fans an action packed showdown, all our pride is on the line and we’re fighting for it.

We asked Vargas what motivates him going into his fight with Garcia and he gave us a simple answer.

To become the best, that’s what motivates me, and this is one step in the route that I plan to take into showing the world that I am the best.

The Jessie Vargas-Mikey Garcia is set to take place in Frisco, Texas on Saturday and will be streamed Live on (DAZN, at 9pm EST