Jim Harbaugh Could Leave Michigan For The NFL 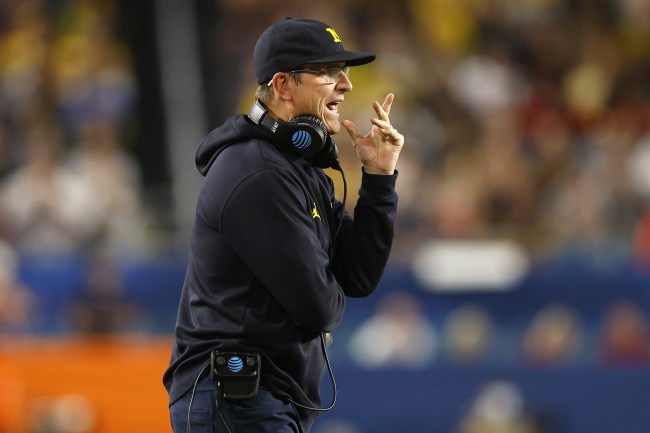 Jim Harbaugh just experienced the most successful season of his career at Michigan. The lasting memory of the season may be the demolition we witnessed on Friday against Georgia, but there were a ton of positives for the Wolverines.

That still might not be enough to keep Jim Harbaugh around for next year. The Athletic is reporting that he could be tempted to take a job in the NFL this offseason.

“And now, The Athletic is hearing rumblings, both from the NFL side and at Michigan, that Harbaugh might be tempted to leave the Wolverines to return to the NFL.‘I think it’s real,’ said one source this week when asked about the possibility of Harbaugh being interested in heading back to the NFL.”

Not only do they believe he’ll head to the NFL, but they think they might even know which job he’ll take.

The Raiders head coaching job might be tough for him to say no to given his ties to the organization — he started his coaching career there in 2003 — and the fact that there’s already a solid quarterback in place in Derek Carr. He’s also friends with Raiders owner Mark Davis.

It wouldn’t be a surprise to see Jim Harbaugh head back to the NFL with how successful he was during his first stint in the league. He at least made it to the NFC Championship game in each of his first 3 NFL seasons and made a Super Bowl appearance.

Even his worst NFL season saw him reach 8-8. That was the Raiders’ best record under Jon Gruden, but they could qualify for the playoffs with a win this weekend.

It would be disappointing to lose out on the Harbaugh-Day drama that’s sure to come with next year’s Ohio State-Michigan game, but he could be a good fit for a Raiders team on the rise.