Jim Nantz Shares His ‘Most Pre-Planned’ Tournament-Winning Call, And It’s An All Timer 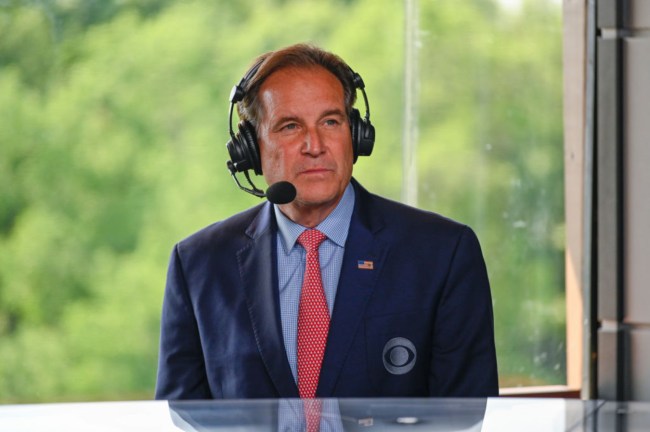 It’s extremely rare to complain about Jim Nantz when he’s in the booth calling a golf tournament. That’s saying a lot, too, given how whiney and negative golf fans – myself included – and golf Twitter can be each and every week.

Nantz recently joined ‘The Press Box‘ podcast and gave some insight into his process of coming up with his calls. His memorable calls don’t just come off the cuff, in fact, his most pre-planned call could very well be his best since he began calling the Masters in 1989.

And yes, of course, it involves Tiger Woods.

“The one that was pre-planned the most of all time in my career, not even close, there’s nothing else I could even compare it to, was Tiger in 1997: a win for the ages,” Nantz explained.

“He had a nine-shot lead on Saturday night. My instincts tell me that this is going to be one of the most historically relevant days in the history of the game. A significance that far transcends a sporting event. That clip, that last stroke, wherever it comes from; a tap-in, a 15-footer, whatever it is, that clip will be played back at every Masters tournament, every Masters opening, every tease in the next 25, 250, 100, 200 years from now.”

“Two-hundred years from now someone is going to open up with the Masters opening tees, which I absolutely treasure that responsibility, but inside that little montage, there’s going to be ‘a win for the ages,’ and I knew that.”

Why Jim Nantz tries to end every major golf tournament with a quotable line.

Nantz’s prediction of ‘a win for the ages’ being said and played over Masters highlights for years to come was, of course, spot on.

Jim Nantz’s ‘A Win For The Ages’ Call