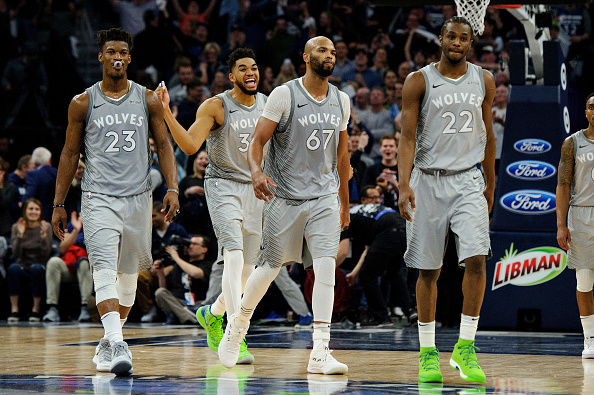 It seems like Jimmy Butler is trying to force the Timberwolves to trade him.

Today, the disgruntled superstar forward showed up to practice a month after requesting a trade and put on a show.

According to Yahoo Sports Butler went hard at his younger teammates Karl-Anthony Towns and Andrew Wiggins.

At one point, Butler found himself guarding Towns in the post and when the big man received the entry pass, Butler yelled, “He can’t do [expletive] against me!” and Towns ended up kicking the ball out, league sources said.

When practice concluded, Butler stormed out of the facility without stretching with the rest of his teammates, league sources said.

Towns then huddled the players up with a message centered on everyone keeping their emotions in check, league sources said. But according to some of the players, the message was empty.

Butler spoke with ESPN after the practice and explained why he was so hard on his younger teammates in practice.

Butler acknowledged that he can be hard on teammates, especially Towns, but he said on Wednesday that the All-Star center started it all by talking trash to him. And he responded.

“I think that’s the part everybody doesn’t see,” he said. “I’m not going to say no names. I’m going to be honest, if your No. 1 priority isn’t winning, people can tell. That’s the battle. Now there is a problem between people. That’s where the disconnect is.”

The Miami Heat are currently attempting to trade for Jimmy Butler but the Wolves continue to play hard ball but after today’s practice it’s hard to see the Wolves allowing Jimmy Butler to practice with them again.