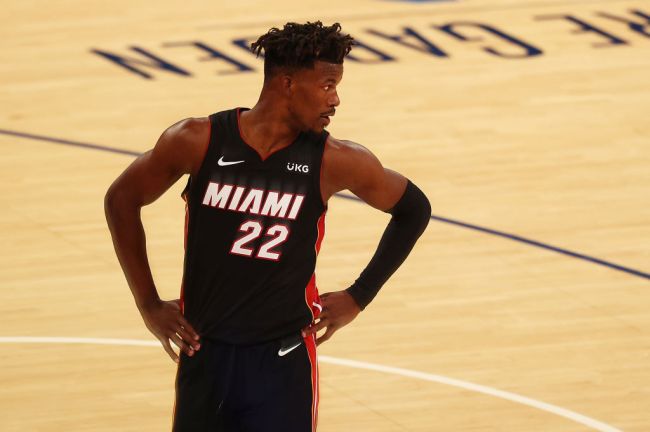 Jimmy Butler has been asked not to use profanity on his Instagram profile and it went exactly how you think it went. Per Butler, his agent Bernard Lee requested that he stop cussing on social media on Tuesday.

In response to the suggestion, Butler took to his Instagram and addressed Lee directly on Wednesday morning. He explained through his IG story that Lee would prefer him to keep his social media clean, so he did the exact opposite.

Butler proceeded to wish “you motherf**kers a good day.” He was clearly joking but he did not take Lee’s plea to heart.

A morning message from @JimmyButler pic.twitter.com/d5EUnam3bS

There is some irony in the situation, because Lee was the one who eviscerated Shams Charania last season. Charania reported that Butler and the Heat coaching staff had some “testy” moments, and Lee used two cuss words in his response.

With that being said, Lee did “star out (**)” the expletives, but it most certainly says the same thing as Butler speaking it.

Shut the f*ck up you click bait, ambulance chasing, dirt bag piece of sh*t. No one has told you this because this is not reality. Go find someone’s assistant to text abt an MRI or some other human calamity you want to be 1st on. We are good over here. https://t.co/ER5iAkk0J8

As for the Miami Heat star, he has never been one to mince words and it’s unlikely that Lee is going to be upset with Butler for going against his wishes.

Last year, Butler said that he thrives with the Heat because he gets to “cuss people out when they not doing they job.”

It was already known that Butler has always been someone who speaks his mind, but now we know that he doesn’t listen to instructions either. This whole exchange is hilarious.