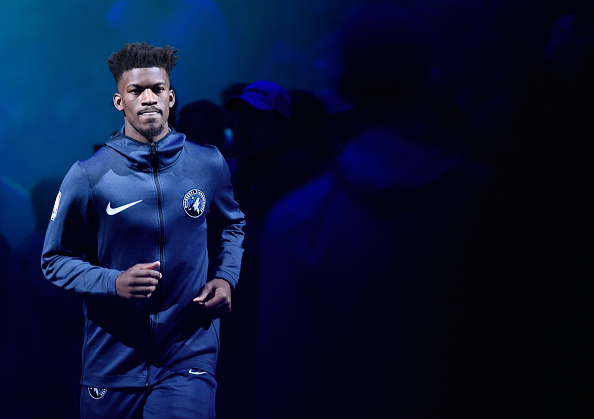 Before the start of the NBA season The Minnesota Timberwolves and Jimmy Butler had agreed that he would continue to play for the team as long as they worked on a trade for him to another team.

The latest is he is going to be going to practice every day, which he has been, and plans to play in games,” said Taylor, who also owns the Star Tribune. “He will be a regular team player. What I said to him in the meantime is our GM, Scott Layden, will be talking to other teams to see if there is a trade that works.”

When asked if he believes Butler will give 100 percent, Taylor said there is no question. He added that Butler will be ready for the season opener Wednesday at San Antonio and the home opener against Cleveland on Friday.

Taylor said that as far as he can tell, there is no chance Butler will remain with the Wolves beyond this season.

“That is not part of the plan, but as you know, things can change,” Taylor said. “But that is not what we have agreed to.”

It appears that Butler’s agreement with Taylor is over because the all-star forward plans to sit out games in an effort to force the team to trade him.

Jimmy Butler is taking next step in six-week-long process aimed at getting the All-Star out of Minnesota by sitting tonight against Utah, and could lead to extended absence for Butler, league sources tell me and @JonKrawczynski.

Butler started contemplating not playing tonight on Tuesday, and the final decision was made Wednesday morning, sources tell me and @JonKrawczynski. Timberwolves termed it "general soreness and precautionary rest,” but Butler informed Tom Thibodeau of his decision.

The situation, as it has through this saga, remains fluid. The Wolves do not play again after tonight until Friday. Possibility remains that Butler could return for that game if he’s not traded by then.

Update: The Wolves are claiming they asked Butler to rest before tonight’s game.

Sources: The Timberwolves suggested that Jimmy Butler rest vs. Utah tonight and there’s an expectation that he will join the team on flight to Bay Area to play Golden State on Friday. Teams talking to Minnesota about trades say that the asking price remains steep.