No. 1 Overall Pick Joe Burrow Carted Off The Field After Season-Ending Knee Injury 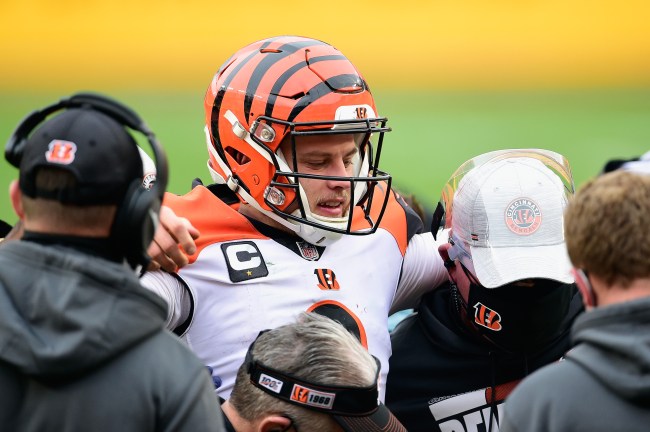 Cincinnati Bengals quarterback Joe Burrow was carted off of the field early in the second half of Sunday’s matchup against the Washington Football Team. The No. 1 overall pick in the 2020 NFL Draft got caught between two pass rushers and took a hit to his lower body.

Here’s the play where Joe Burrow was injured

Football Team defensive tackle Jonathan Allen came in from Burrow’s left and wrapped his legs while defensive end Montez Sweat came off of his right and hit him high. Burrow’s left leg was planted as he released a throw and his body folded in the opposite direction over the would-be tackler as he was taken to the ground. His left leg took the force of the hit.

Cincinnati’s franchise quarterback stayed down on the field and was unable to get up, writhing in pain and grabbing at his left knee. He was could move and the medical staff had to secure the injured leg in a stabilized position.

Joe Burrow being carted off after this play 🙏 pic.twitter.com/SYxCrWkFXN

Players from both teams, including No. 2 overall pick Chase Young and his Ohio State teammate Dwayne Haskins, met the former Heisman Trophy winner on the field and expressed their well wishes. Others took a knee and showed their emotions while the stadium stayed completely silent.

All love for Joe Burrow as he goes off the field. Including from Chase Young, Haskins, McLaurin pic.twitter.com/t42duvQWIQ

Burrow was carted off of the field in good spirits but the injury did not look good and he has been ruled out.

Joe Burrow gave the thumbs up as he went off. Meant to mention Terry McLaurin, though you see in the video, also went over to speak to his former OSU teammate. pic.twitter.com/qzUXTj2H4n

The team has yet to release any information, but Burrow tweeted shortly after being taken to the locker room that his season will be over.

The former LSU Tiger National Champion already has five games with more than 300 passing yards, one shy of tying Andrew Luck’s 2012 rookie record, and is one of four quarterbacks in NFL history with at least five 300-yard games in their first ten career games. He is alongside Luck, Kurt Warner and Patrick Mahomes on that list. Mahomes and Russell Wilson were among the many to share their reactions to the injury on social media.

PRAYERS UP FOR MY QB🙏🏽@JoeyB