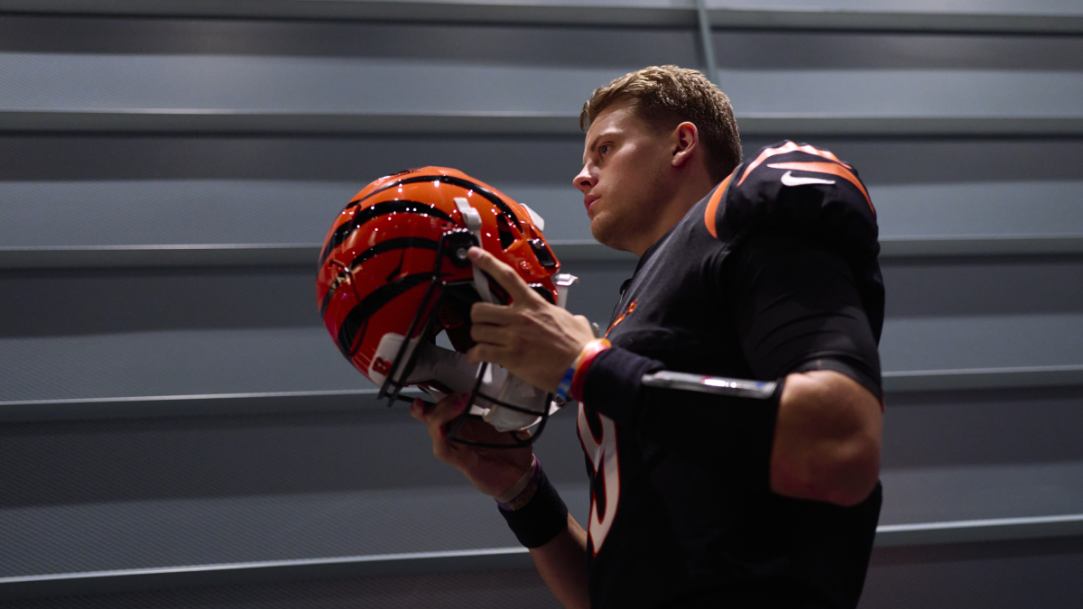 The Cincinnati Bengals put up huge numbers on Sunday with a 37-30 win over the Pittsburgh Steelers. This moved Joe Burrow and the defending AFC champion Bengals to 6-4 on the season.

This win saw Joe Burrow put up some MONSTER stats and not necessarily by connecting with the usual suspects on their roster. He threw for 4 touchdowns, connecting with Samaje Perine for 3 TDs on 4 total receptions and Trenton Irwin had the 4th.

After the game, Joe Burrow spoke with reporters and he was buzzing. His comments about being ‘in the zone’ on the field and how he’s connecting with his teammates right now reveal just how hot the Bengals have gotten in a short period of time.

When asked about how that win felt, Burrow told a reporter it was “one of my favorite wins since I’ve been here” in Cincinnati. He was then asked about his connection with Samaje Perine. Joe Burrow said “Samaje’s just — one, obviously, he’s a great player. He steps up whenever his opportunity presents itself. And two, he’s — you know, one of those locker room guys that everybody talks about.” Burrow added that Samajie is “great in the locker room. Great guy to talk to. Culture builder. He’s fun to play with.”

These two got it done. #53BetterTogether | @FifthThird pic.twitter.com/FenfGRVx4O

A reporter asked Joe Burrow about having 11 straight completions on second-half touchdown drives and if Joe Burrow is aware of something like that in those moments.

Burrow said “No, you’re not really thinking about that at the time. But, you know, it’s great when it shakes out that way. But sometimes it doesn’t and you got to — sometimes you’ve got to throw the ball away and, you know, get out of harm’s way. But when you have a stretch like that, it’s — you know, you’re in rhythm.”

Joey B was dishing out compliments left and right. When asked about his 92 and 93-yard TD drives he deflected to share praise of Pittsburgh’s TJ Watt. Saying “TJ Watt’s an unbelievable player. He just continues to make plays like that. And then another tipped ball. They do a good job getting theirs hands up, understanding drops and reads. Just a lot of adversity today, a lot of great things from a lot of people.”

Another milestone in the books.

In the game, Joe Burrow tied Kurt Warner as the third-quickest NFL quarterback to reach 10,000 passing yards. When asked if he was aware of that record, Joe Burrow said “yeah, something that I’m proud of. You know, I think that shows the kind of player I’ve been since I’ve been here. I’ve got a lot of great people around me, obviously. Great coaches, great players. So it was a team effort, but that’s one I’m proud of.”

When asked about the Bengals’ momentum right now, Burrow said “I think we’re playing as good as anybody. We’re hitting our stride offensively. Still left some points out there. There’s always room to improve, obviously. But the last couple weeks, you know, apart from that Monday night game, we’ve been pretty lights out.”

That is the same confidence of the Joe Burrow we saw lead the Cincinnati Bengals to the Super Bowl last season. The Bengals published a full transcript of Burrow’s press conference. It’s hard to read through the rest of his comments without thinking the Bengals are BACK. And Cincy fans agree:

They get Chase back hopefully next week

“He’s nothing without Chase”.

Also, Chase is back

Joe Burrow and the Bengals now face the Titans, Chiefs, Browns, Buccaneers, Patriots, Bills, and Ravens. That might be the most difficult schedule left in the NFL…