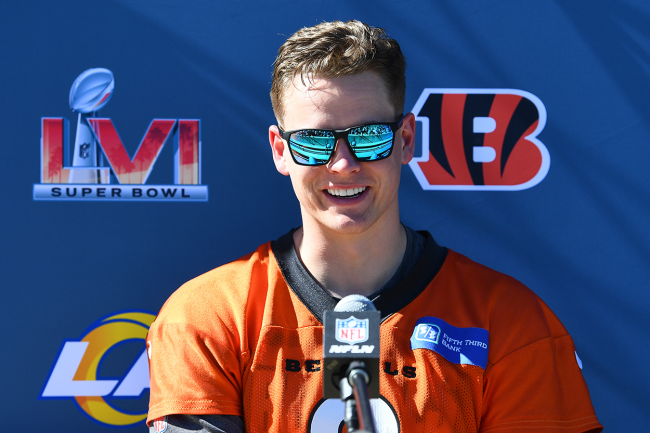 Joe Shiesty, Joey Jackpot, Joe Brrr, Joe Coo, Joey Franchise… whatever you want to call him, Joe Burrow never fails to bring the heat. After making a huge splash with his AFC Championship chain, the 25-year-old quarterback stepped it up for the Super Bowl.

As the Bengals left the team hotel and boarded the buses to SoFi Stadium, Burrow came through DRIPPING.

Rocking his signature sunglasses, Burrow rolled out to the big game in a perfectly-tailored suit that surely cost him a small fortune. Atop his head, he was sporting a black hat that can only mean business.

A black hat typically signifies the villain. Back in western times, a black hat symbolized whether a person was on the good side or the bad side.

On Sunday, although much of the world (including Browns fans, for some reason) is rooting for Burrow, he is rolling into the Rams’ home stadium to play the Rams. He is the outlaw, hoping to win his underdog Bengals their first-ever Super Bowl.

All the way down to the way he walked, Burrow was swagged all of the way out.

He kept his head down, headphones in and dialed in.

When the team arrived, Burrow was near the back of the bus.

The strut is that of a legend.